Monday brought some interesting results between the indices and the sectors. All four of the main indices opened lower and all four rallied off their morning lows. The Dow and the Russell managed to move in to positive territory at different points, but late-day selling took all four lower again. The Dow did manage to hold on and close with a gain of 0.09%, but the other three all closed lower and near their lows of the day.

With the results from the indices in mind, you would probably think it was a rough day for the sectors, but they were evenly split on the day, five moved higher and five moved lower. The energy sector was the top performer with a gain of 3.79% while the financial sector gained 0.97%.

My scans produced yet another negative result on Monday with 40 bearish signals and 24 bullish signals.

Despite the continued streak of negative results, the barometer continued to climb. The final reading last night was -28.4, up from -39.1 on Friday.

Today’s trade idea is a second straight bullish idea and this time it is on an ETF. The bullish list was littered with gold mining stocks and gold oriented funds. In fact 13 of the 24 bullish signals were somehow related to precious metals. The setup I liked best was on the VanEck Vectors Junior Gold Miners ETF (NYSE: GDXJ). We don’t have fundamental ratings since it’s a fund, but given the vast number of gold related issues on the bullish list, I think that makes up for not having fundamental ratings. 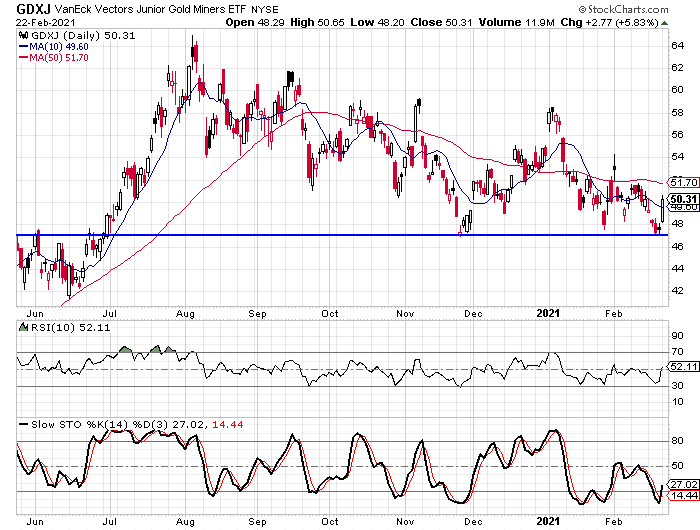 Looking at the chart, the first thing that jumped out was the support in the $47 area. The fund bottomed in this area back in November before rallying and if we go back to June, the area acted as resistance. This seems to be a critical level for the GDXJ. We also see that the daily stochastic indicators made a bullish crossover last night after being in oversold territory.