The indices were mixed on Friday after opening on a positive note. All four indices opened higher, but they weren’t all able to hold on to their gains. Three of the four turned lower and closed off their highs. Only the Russell was able to remain elevated and it closed with a gain of 2.18%.

As for the other three, the Nasdaq held on for a gain of 0.07%, while the Dow gained less than a point. The S&P actually dropped in to negative territory and took a loss of 0.19%.

The sectors were split on Friday with six moving lower and four moving higher. The results were kind of strange because all four that moved higher gained over 1.0% and three of the six that moved lower fell over 1.0%. The materials sector led the way with a gain of 1.83% and the energy sector bounced back with a gain of 1.67%.

On the down side, the utilities sector dropped 1.49%, the consumer staples sector lost 1.26%, and the healthcare sector fell 1.21%.

The scans continue to produce negative results with 33 bearish signals and 22 bullish signals.

The barometer rose to -39.1 from -55.1 after these results were added in to the calculation.

It seems to make sense with the market not having much momentum in either direction that we would keep with the pattern of alternating bullish ideas and bearish ideas. That means today’s idea is a bullish one and it is on Alteryx (NYSE: AYX). The stock appeared on the bullish scan and it has great fundamental ratings. The EPS rating is 87 and the SMR grade is an A. 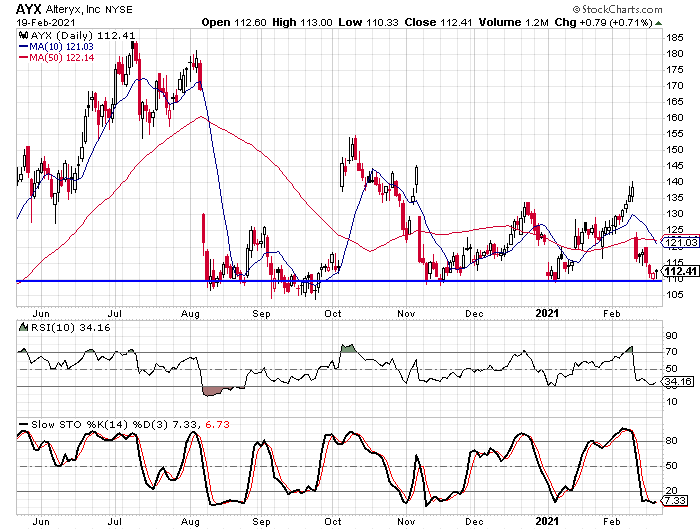 The stock pulled back sharply after reporting earnings on February 9, but it seems to have found support in a familiar place. The $109 area served as support in November and in January. The last two times the stock was down at $109 with the stochastic indicators in oversold territory it rallied sharply over the next five weeks.

23 Must-Have Stocks [sponsor]
Former hedge fund manager projects all these "under the radar" stocks to take-off.