Wednesday started on a sour note with all four of the main indices opening in negative territory. Three of the four would also finish in negative territory with only the Dow posting a gain. This is the second straight day the Dow has posted a gain while the other three indices fell. Yesterday’s gain was 0.29%.

The Russell took the biggest loss for a second straight day and this time it was 0.74%. The Nasdaq dropped 0.58%, but closed well off its low, and the S&P only lost 0.03% after rallying throughout the afternoon.

Seven of the 10 main sectors moved higher on Wednesday in a reversal of the results from Tuesday. The energy sector led the way once again, gaining 1.51%. The consumer discretionary sector moved up 0.57% and the financial sector tacked on 0.45%.

The tech sector fell 0.92% and that was the worst performance on the day. The industrial sector dropped 0.27% and the materials sector inched lower by 0.04%.

My scans turned a little more negative last night after slowing down a little on Friday and Tuesday. The final tallies from last night showed 82 bearish signals and 21 bullish signals.

The barometer moved slightly higher with these results, moving up to -55.7 from -64.0 on Tuesday.

I have a little longer time horizon for today’s trade idea. The company is Pfizer (NYSE: PFE) and it appeared on the bullish list last night. The EPS rating is above average at 69 and the SMR is an A. 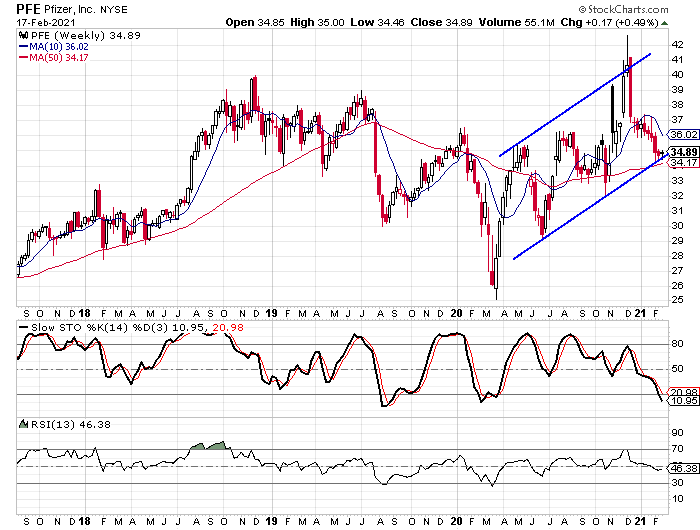 The weekly chart shows the trend for the chart better than the daily chart. Pfizer is oversold based on the weekly stochastic indicators. The indicators are at their lowest level since last March. We see how the lows from June and October connect to form the lower rail of a trend channel and the stock is hovering just above the rail at this time. The 50-day moving average is just below the lower rail and that should provide a second layer of support.