Investors didn’t enter this week with the same enthusiasm they had last week. All four indices opened higher in the morning, but only the Dow managed to hold on to its gain. The index finished with a gain of 0.20%.

The Russell finished with the worst loss at 0.72% and it was followed by the Nasdaq which fell 0.34%. The S&P was in positive territory for most of the day before a late dip caused it to lose 0.06% on the day.

Seven of the 10 main sectors dropped on Tuesday with the worst performance coming from the utilities sector which lost 1.12%. The healthcare sector dropped 0.99% as the second worst performance.

The energy sector gained 2.51% as the top performer and the financial sector rallied 1.71%. The communication services sector moved up 0.48% as the third sector in the black.

My scans were negative for the eighth straight night, but the discrepancy between the two lists wasn’t as bad. There were 43 bearish signals and seven bullish signals. That’s the smallest discrepancy since last Tuesday.

The barometer rose slightly once these results were added in to the equation, climbing to -64 from -84.3.

With my scans continuing to produce a greater number of bearish signals, I have a bearish trade idea for you today. Pure Storage (NYSE: PSTG) appeared on the bearish list and its fundamental ratings are mixed. The EPS rating is poor at 27, but the SMR rating is above average with a B grade. 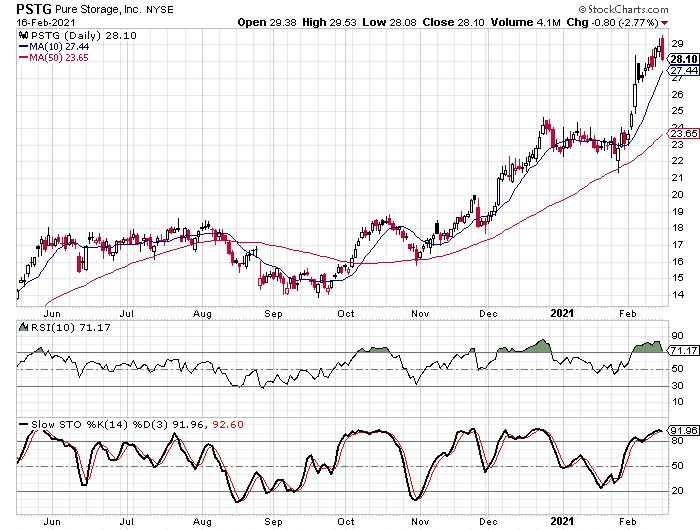 Two things caught my eye on the chart. First, the bearish engulfing pattern that was created by yesterday’s candle completely engulfing the previous day’s candle. Secondly, the RSI fell sharply while in overbought territory and the stochastic indicators made a bearish crossover. We saw similar patterns in October and December. In both cases, the stock fell over the weeks that followed.

Buy to open the March 30-strike puts on PSTG at $3.40 or better. These options expire on March 19, 2021. I suggest a target gain of 75% and that means the stock will need to drop to $24.05. The $24 area served as temporary resistance in December and January and could now act as support on a pullback, so that is why I chose the target gain that I did. I recommend a stop at $30.10.