The indices were split again on Thursday with two moving higher and two moving lower. The Nasdaq gained 0.38% to lead the way and it was joined in positive territory by the S&P which gained 0.17%.

Both the Dow and the Russell experienced minimal losses with drops of 0.02% and 0.04%, respectively.

The sectors had a slight skew to the downside with six moving lower and only four moving higher. The energy sector took the worst hit with a drop of 1.57%. The utilities sector lost 0.55% as the second worst performer.

On the plus side the tech sector jumped 1.12% to lead the way. The healthcare sector rallied 0.20% as the second best performer.

Even though there were far more bearish signals than bullish signals, and after three straight bearish trade ideas, I have a bullish idea for you today. The company is Cerner (Nasdaq: CERN) and it was on the bullish list last night. The fundamental ratings are good with an EPS rating of 69 and an SMR rating of a B. 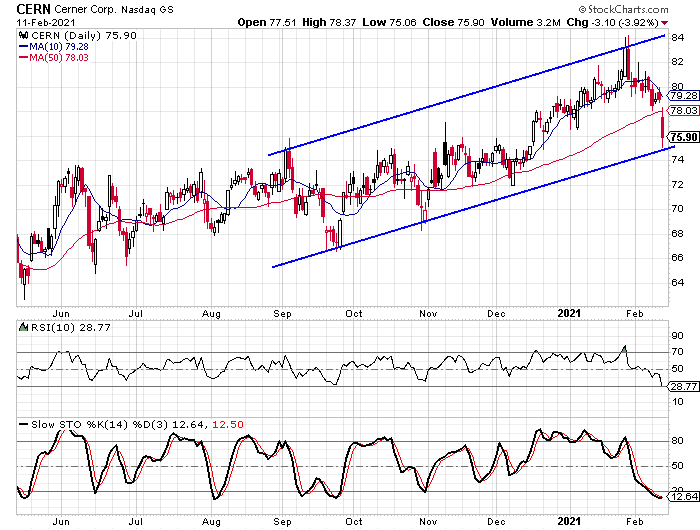 Cerner has been pretty volatile over the last six months, but you can see how an upwardly sloped trend channel has formed. The stock is down near the lower rail at this time and it is oversold based on the daily stochastic indicators. The last two times the indicators were this low, the stock bounced pretty quickly.