Wednesday saw another mixed day for the indices with the Dow finishing higher by 0.20% while the other three were down on the day. The Russell fell 0.72%, snapping its seven-day winning streak.

Once again we had mixed results from the sectors with five moving lower, four moving higher, and one (the financial sector) finished unchanged. The energy sector was the top performer with a gain of 1.91% and the materials sector moved up 0.95%.

The consumer discretionary sector was the worst performer with a decline of 0.99%.

The barometer dropped drastically when these results were added in, falling to -71.6 from -27.6.

Once again there were just too many options on the bearish list compared to the bullish list and so we have a third straight bearish trade idea. Today’s trade is on Melco Resorts & Entertainment (Nasdaq: MLCO). The company’s fundamental ratings are pretty bad with an EPS rating of 5 and a D on the SMR grading scale. 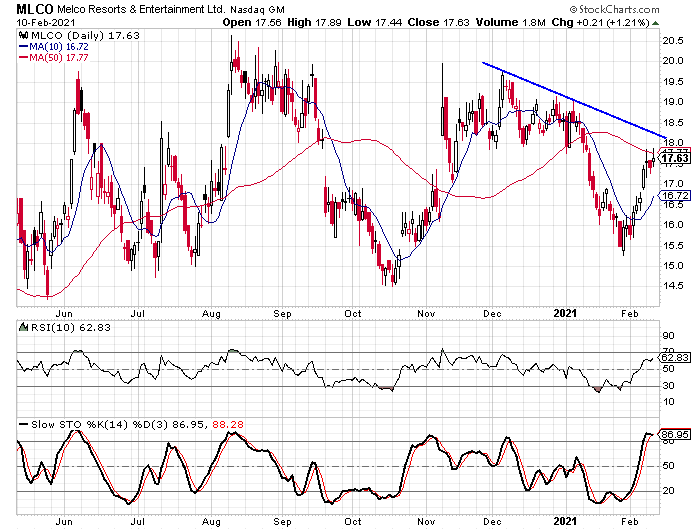 We see on the chart how the stock has been trending lower, but with pretty wild swings over the last nine months. There is a trend line that connects the highs from December and January, and I don’t think the stock breaks above that trend line in the next few months.

America's top stock picker: Sell these 25 stocks now [sponsor]
Eric Fry is widely considered the best stock picker in America — he's found 60 stocks that have gained 500% or more. And today, Fry says some of America's most popular brands are "must sells" in the stock market. Learn more, including more info on Fry's next 500% or higher potential winner, here.