The Dow and S&P saw their six-day winning streaks come to an end yesterday as the indices finished mixed on the day. The S&P lost 0.11% and the Dow only slipped 0.03%, but they were down never the less.

As for the Russell, it stretched its winning streak to seven days with a gain of 0.28%. The Nasdaq joined the small-cap index in the black with a move of 0.14%.

Like the indices, the sectors were evenly split on Tuesday with five moving higher and five moving lower. On the plus side, the communication services sector led the way with a gain of 0.33% and the industrial sector gained 0.25% as the second best performer.

The energy sector took the biggest hit on the day, falling 1.05%. The materials sector dropped 0.74% as the second worst loss and the consumer discretionary sector fell 0.53%.

My scans continued to move to a more negative posture on Tuesday with 65 bearish signals and nine bullish signals. That is the biggest negative reading in two weeks.

With the lists being so lopsided, today’s trade idea is another bearish one. The subject company is Carnival Plc. (NYSE: CUK) and yes, it appeared on the bearish list. The company’s fundamental ratings are pretty bad with an EPS rating of 5 and an SMR rating of an E. 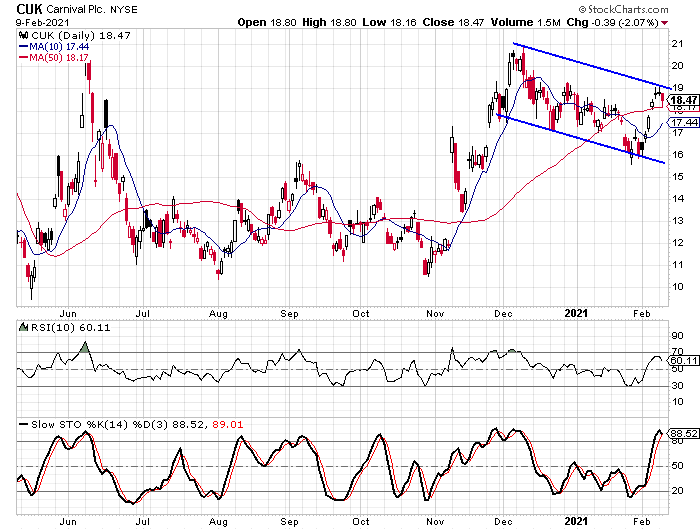 It might be a little early to call this a downward-sloped trend channel, but the pattern on the chart was what jumped out at me first. Companies like Carnival have been bouncing around depending upon how stimulus talks seem to be going. Even though it appears as though there is another round of stimulus on the horizon, but I still think it is going to be a while before cruise operators see anywhere near the traffic they were seeing pre-pandemic.