Stocks moved higher again on Monday and that stretched the winning streak for the Dow, Russell, and S&P to six straight days of gains. That is the longest winning streak since August for the S&P.

Nine of the 10 main sectors moved higher on the day with the utilities sector losing 0.77% as the only one to finish in the red.

The energy sector jumped 4.18% to lead the way. The financial sector gained 1.29% and the tech sector rallied for a 1.05% gain. Those were the only three sectors that gained over 1.0%.

My scans remained negatively skewed on Monday, but the gap between the two lists shrank slightly. There were 27 bearish signals and 19 bullish signals. There were a number of signals on bond ETFs, but those aren’t part of the barometer calculation and aren’t included in the totals above.

The barometer dropped in to negative territory once the results from last night were added in to the equation. The final reading was -2.8, down from 12.4 on Friday.

Today’s trade idea goes against the grain from what I usually look for out of these trades. Salesforce.com (NYSE: CRM) appeared on the bearish list, but it has great fundamental ratings. In fact, the company gets the best possible EPS rating possible at 99 and it gets an A on the SMR grading scale. However, the chart paints a different picture. 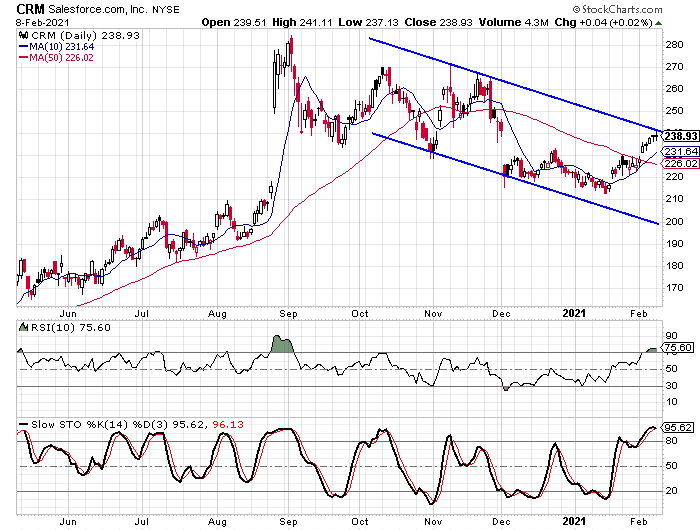 As you can see, the stock has been trending lower since early September. A trend channel has formed over the last few months with the highs from November connecting to form the upper rail. The stock is right up against the upper rail right now and it is overbought. Looking at recent instances where the stochastic indicators were elevated and made a bearish crossover, the stock has experienced a rather quick reversal—usually lasting less than three weeks. The pattern looks most similar to the one we saw in early October.