Monday brought us a little bit of everything in the market, at least from indices and their movements. We finished the day with an even split with two moving higher and two moving lower. The two that finished higher also opened higher. The Nasdaq and S&P both dropped in to negative territory in the morning, and then rallied to close with gains. The Nasdaq led the way with a gain of 0.69% while the S&P gained 0.36%.

The Russell also opened higher, but it also dropped in to negative territory in the morning. However it didn’t manage to move back in to positive territory and finished with a loss of 0.25%.

The Dow opened lower and remained there throughout the day. It did manage to rally to close at its high of the day, but still lost 0.12%.

As for the sectors, they were split on the day with six moving higher and four moving lower. The two defensive sectors led the way with utilities gaining 2.01% and consumer staples gaining 1.0%.

The energy sector was the worst performer with a loss of 1.02% and the financial sector dropped 0.73% as the second worst.

After climbing toward positive territory all of last week, the barometer dropped to -36.0 from -10.9 on Monday.

Even though there were far more bearish signals, the trade setup that stood out the most to me was from the bullish list. Pepsico (Nasdaq: PEP) is a household name and the company’s fundamental ratings are pretty good. The EPS rating is a 67 and the SMR rating is an A. 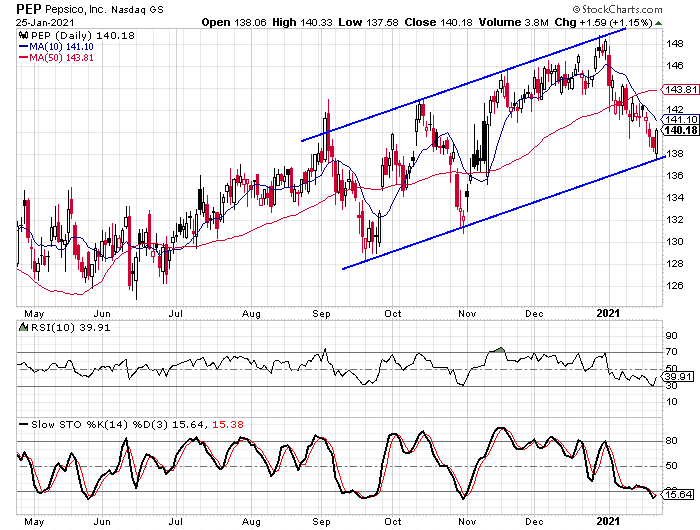 The chart shows how the stock has been trending higher with some pretty sizable swings creating a trend channel. The stock just hit the lower rail of the channel and we see that the RSI and stochastic indicators were in oversold territory. The last time this happened was the end of October and the stock rallied sharply after those readings.

23 Must-Have Stocks [sponsor]
Former hedge fund manager projects all these "under the radar" stocks to take-off.