We saw a mix of activity on Friday with two indices moving higher and two moving lower. All four indices opened lower and it took rallies in the afternoon for the two to make it up to positive territory.

The sectors weren’t nearly as evenly split as the indices. Eight sectors moved lower and only two moved higher. The utilities sector gained 0.14% to lead the way and the communication services sector inched up 0.04% as the only other sector to gain ground on the day.

On the down side, the financial sector fell 0.72% as the worst performer. The industrial sector and the energy sector tied for the second worst performance with both falling 0.52%.

Despite the consecutive negative readings from the scans, the barometer continued to inch higher. The final reading on Friday was -10.9, up from -14.6 on Thursday.

Today’s trade idea is a bullish one on Lumentum Holdings (Nasdaq: LITE). The company has great fundamental readings with an EPS rating of 96 and an SMR rating of an A. 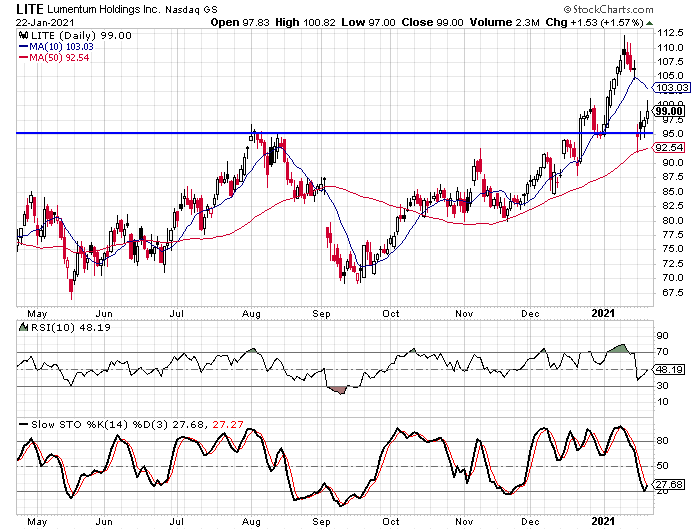 Lumentum dropped sharply last Tuesday after the company announced the acquisition of Coherent (COHR). Two things stood out to me about Tuesday. First, the stock found support at its 50-day moving average. Secondly, the stock rallied to close just shy of the $95 area. That area served as resistance back in August. The stock would rally over the next three days and moved back above that area.