The indices had a hard time gaining much traction in either direction on Tuesday, but they finished on an upswing to close in positive territory. All four of the main indices finished higher on the day, but the Russell jumped 1.77% to stand out above the rest.

The sectors were evenly split with five moving higher and five moving lower. The energy sector jumped by 3.49% to lead the way and it was followed by the consumer discretionary sector with a gain of 1.53%. Two other sectors gained over 1.0%.

The communication services sector fell 1.61% as the worst performer and it was followed by the healthcare sector which dropped 1.10%.

My scans remained skewed to the negative side with 85 bearish signals and 12 bullish signals.

Even though there were numerous stocks to choose from on the bearish list, there were only two where I liked the charts for a downward move. Both of those stocks had pretty strong fundamentals, but I decided a bearish trade idea on Baxter International (NYSE: BAX) provided the best odds of success. The EPS rating is an 85 and the SMR rating is an A, but the chart suggests a downturn is on the horizon. 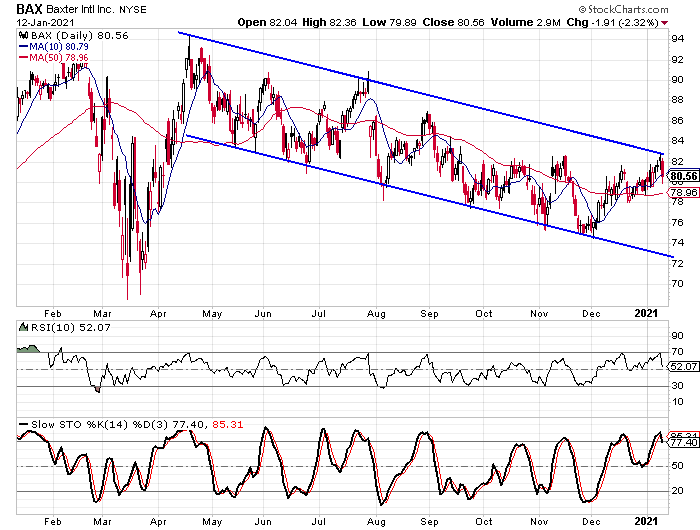 We see on the daily chart how Baxter has been moving lower since last April and a trend channel has formed that defines the various cycles within the overall downward trend. The stock just hit the upper rail of the channel and the RSI and stochastic indicators both just hit overbought readings. The stochastic indicators made a bearish crossover last night.