Stocks got off to a rough start to the week with all four indices falling on Monday. The Russell was the only index that even touched positive territory during the day and even that was a brief period. The small-cap index did end up only losing 0.03% and that was the smallest loss on the day.

The sectors were slightly mixed on the day with three moving higher, one finishing unchanged, and six moving lower. The energy sector led the charge with a gain of 1.57%. The healthcare sector gained 0.49% and the financial sector moved up 0.36%.

The materials sector was the one that finished unchanged.

My scans turned decidedly bearish with the downward moves in the indices. There were 109 bearish signals and 10 bullish signals.

After flirting with positive territory on Friday, the barometer dropped to -40.0 on Monday.

The biggest themes on the bearish lists last night were ETFs that represent foreign markets and energy stocks. Despite those being the prevailing themes, I went in a different route for today’s trade idea. It is a bearish idea, but not on an energy stock or foreign market ETF. It’s on Gilead Sciences (Nasdaq: GILD). The company’s fundamentals are mixed with an EPS rating of 57 and an SMR rating of an A. 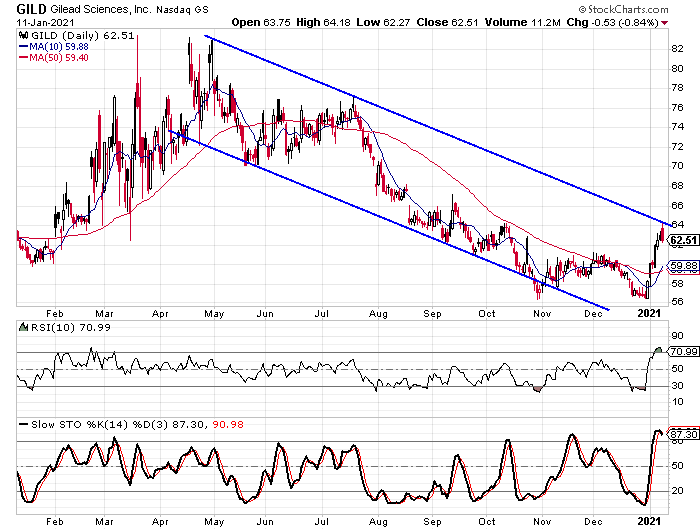 The biggest driver behind this trade is the chart. We see that the stock has been trending lower since last April. That high connects with the July high to form an upper rail to a downwardly sloped trend channel. The stock is overbought based on the 10-day RSI and the daily stochastic indicators. The stochastics made a bearish crossover last night.

Buy to open the March 65-strike puts on GILD at $5.05 or better. These options expire on March 19, 2021. I suggest a target gain of 75% which means the stock will need to drop to $56.16. The stock bottomed in the $56.50 area both in October and December, so we will need it to break that support to hit our target, at least on an intrinsic basis. I would keep an eye on the area possibly acting as support and if you are close to the 75% target gain, take it. I recommend a stop at $66.00.