After losing ground on Tuesday and Wednesday, stocks saw some buying pressure on Thursday. All four of the main indices gained ground, but all four opened in negative territory.

The Dow and S&P were in negative territory for most of the day and they finished with the smallest gains. The S&P gained 0.39% and the Dow inched up 0.15%. The Nasdaq moved up 0.87% as the top performer and the Russell was right behind it with a gain of 0.86%.

The energy sector continued to be the most volatile and yesterday it was the leading sector with a gain of 1.58%. The tech sector was the second best performer with an upward move of 0.81%.

My scans turned decidedly more bearish yesterday despite the gains in the indices and sectors. There were 202 bearish signals and 12 bullish signals.

The barometer plunged to a reading of -104.8, down from -43.5 on Wednesday. The reading was the lowest since October 14 and reading came just after the market topped on October 12.

Yes there was an abundance of bearish stocks and ETFs to choose from, but one sector in particular was well represented on the bearish list. One exploration company in particular stood out for its setup. Holly Frontier (NYSE: HFC) has poor fundamental ratings with an EPS rating of 28 and an SMR rating of a D. 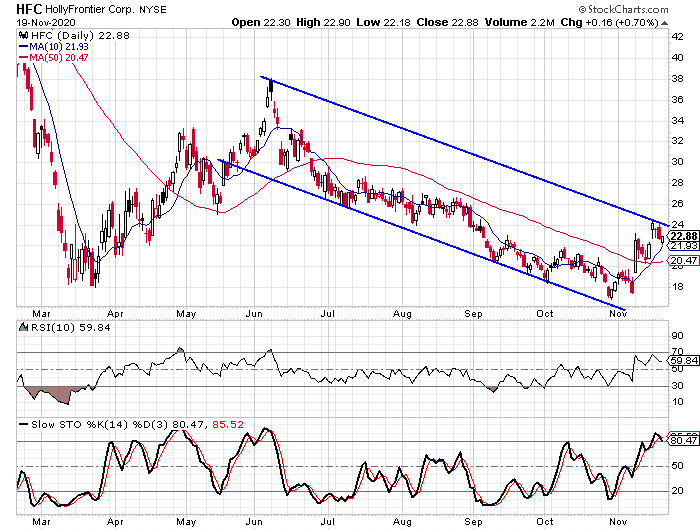 I drew the trend channel based on the series of lower lows first and then drew the upper rail. We see how the stock hit the upper rail and is in overbought territory at this time. The stochastic indicators made a bearish crossover last night and that has been a pretty good sign that a downswing was coming.