Stocks saw some selling pressure on Tuesday and the indices gave back some of the gains from Monday. The retail sales report for October came in below expectations and that got the market off to a rough start, but all four indices closed well off their lows.

In a reversal from Monday, nine of the 10 sectors lost ground on Tuesday. The only sector that managed to log a gain was the energy sector which moved up 1.02%. The second best performer was the financial sector which lost 0.14%.

The worst performer on the day was the utilities sector with a loss of 1.96%. It was the only sector that lost over 1.0%. The consumer staples sector fell 0.72% as the second worst performer.

The barometer continued to rise and finished with a reading of -21.4. The reading for Monday was -27.0.

After a couple of bullish trade ideas in a row, I have a bearish one for you today. The company is Virgin Galactic Holdings (NYSE: SPCE) and it appeared on the bearish list last night. The company’s fundamental ratings are really bad with an EPS rating of 14 and an SMR rating of an E. 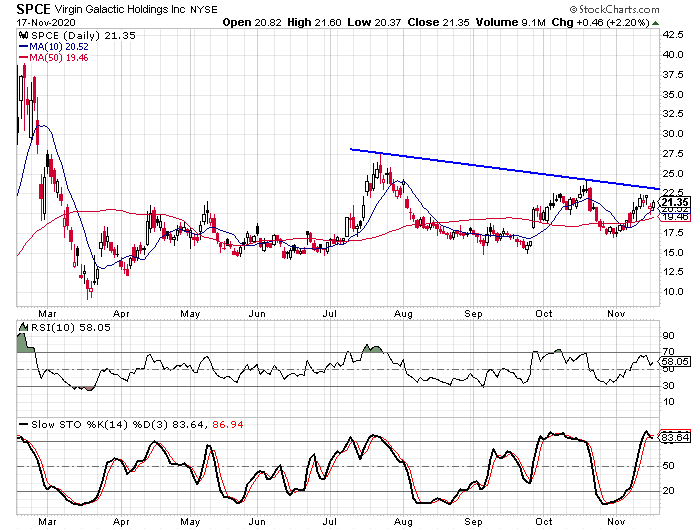 We see on the daily chart that the stock has been trending lower for the last four months. If you connect the highs from July and October it gives us a downward sloped trend that is right in the $23 area currently. I look for the stock to go through its next downward cycle over the coming weeks.