Stocks bounced back a little on Thursday to make up some of the losses from the first three days of the week. Third quarter GDP and initial jobless claims were both a little better than expected and that got things heading in the right direction from the opening bell.

Eight of the 10 sectors moved higher with healthcare falling 0.76% and consumer staples dropping 0.02% as the only two sectors that finished in the red.

The energy sector led the gainers with a move of 3.07%. The communication services sector jumped 2.52% as the second leading sector. In all there were five sectors that posted gains greater than 1.0%.

My scans turned positive with stocks moving higher after three straight days of selling. There were 47 bullish signals and not a single bearish signal last night.

The barometer moved in to positive territory once these results were added in to the equation, moving up to 14.3 from -5.9.

It’s not hard to guess whether today’s trade idea is a bullish or bearish one given there were no bearish signals to work with. There were several stocks on the bullish list that got my attention, but it was Texas Instruments (Nasdaq: TXN) that stood out the most. The company scores a 79 on the EPS rating and an A on the SMR grading system. 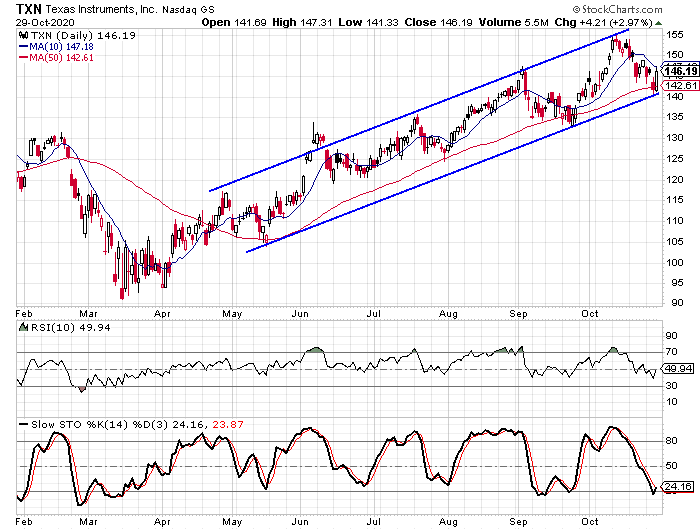 The chart shows how the stock has been trending higher since the March low and a trend channel has formed in the last six months. The stock just hit the lower rail of the channel and it found support at its 50-day moving average. Another thing I took note of was how the stock performed after the last bullish stochastic crosses. There were cases in May, June, August, and September. The average gain in the month that followed was 18.3%.

Upgrades and Downgrades for Tuesday, 12/1