The selling that started on Monday not only continued on Wednesday, it intensified. All four indices opened lower and continued lower throughout the day. All four closed at or near their lows of the day.

All 10 sectors fell and all of them lost over 2.5%. The financial sector recorded the smallest loss at 2.56%. The materials sector fell 2.82% and that was the second smallest loss.

The tech sector took the biggest hit with a drop of 4.24% and the energy sector fell 4.18%. These were the only two sectors that lost over 4.0% on the day.

Because of all the selling this week, my scans didn’t produce too many signals on either side last night. There was only one bullish signal and six bearish signals.

The barometer did move a little lower as a result of the third straight bearishly skewed day, falling to -5.9 from -0.4.

Even though there were very few stocks to choose from, there was one stock that got my attention. HSBC Holdings (NYSE: HSBC) appeared on the bearish list last night and its fundamental ratings are pretty bad. The EPS rating is only an 11 and the SMR rating is a D. 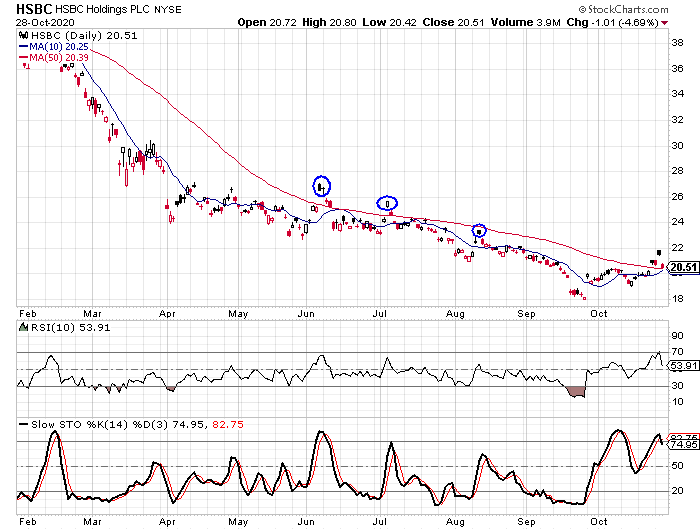 What jumped out at me on the chart was a series of island tops that I have marked with the blue circles. In each of the cases, after the gap lower formed the island top, the stock fell at anywhere from 10.25% to 19.65% with an average loss of 14.87%. A drop of that magnitude this time would put the stock down around $17.50.