Stocks were met with more selling pressure on Thursday as all four indices opened sharply lower. Initial jobless claims came in worse than expected that helped set the negative tone. The indices did rally back, but three of the four still closed in negative territory. The Russell managed to rally and close with a gain of 1.06%.

The sectors were evenly split on Thursday with five moving higher and five moving lower. The energy sector led the way with a gain of 1.21% and the financial sector tacked on 0.77% as the second best performer.

The communication services sector was the worst performer for a second straight day. It fell 0.77% yesterday. The healthcare sector dropped 0.72% as the second worst performer.

My scans remained negatively skewed, but the number of stocks on the bearish list did drop dramatically. There were 38 bearish signals and three bullish signals on the day.

With the lower number of signals, the barometer moved up a little. The final reading last night was -89.4, up from -111.7.

Once again there weren’t any setups on the bullish side that I liked and that leaves me with the fifth straight bearish trade idea. The company that stood out the most was Cabot Oil & Gas (NYSE: COG) and like Kraft Heinz yesterday, the fundamentals aren’t terrible. Cabot’s EPS rating is 56 and the SMR rating is a B. 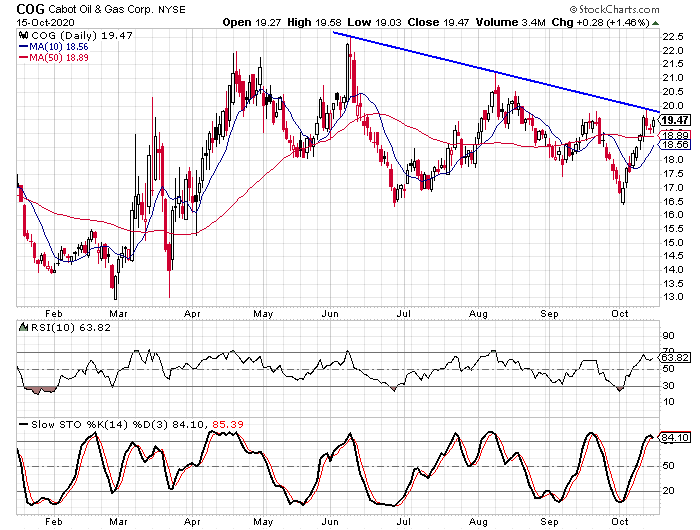 Once again it was the chart that led me to this trade. We see that a trend line connects the highs from the last five months and the stock just hit it. The daily stochastic readings are in overbought territory and made a bearish crossover yesterday. Three of the last four instances where this happened preceded sizable declines in the stock.