The selling pressure that hit the market on Tuesday carried over to Wednesday. All four indices opened in positive territory, but the bullish enthusiasm was short lived. The indices were all in negative territory by midday.

The sector performances weren’t nearly as negative as they were on Tuesday, but there were still seven that lost ground while only three moved higher. The industrial sector led the way with a gain of 0.60%. The energy sector moved up 0.43% and the materials sector inched up 0.32%.

The communication services sector dropped 1.21% as the worst performer and it was followed by the consumer discretionary sector fell 1.12%. The financial sector lost 1.04%, giving us three sectors with losses greater than 1.0%.

My scans remained negative and the bearish list was once again considerable. There were 88 bearish signals compared to only three bullish signals.

The barometer moved a little lower with those numbers being added in to the equation. It came in with a reading of -111.7, down from -107.3.

I wasn’t really looking to make four straight bearish trade ideas, but with only three stocks to choose from on the bullish side there wasn’t much of a choice. There were several stocks that presented opportunities on the short side, but the one that stood out the most was Kraft Heinz (Nasdaq: KHC). The fundamentals aren’t terrible with an EPS rating of 67 and a C SMR grade. However, the chart was what got my attention. 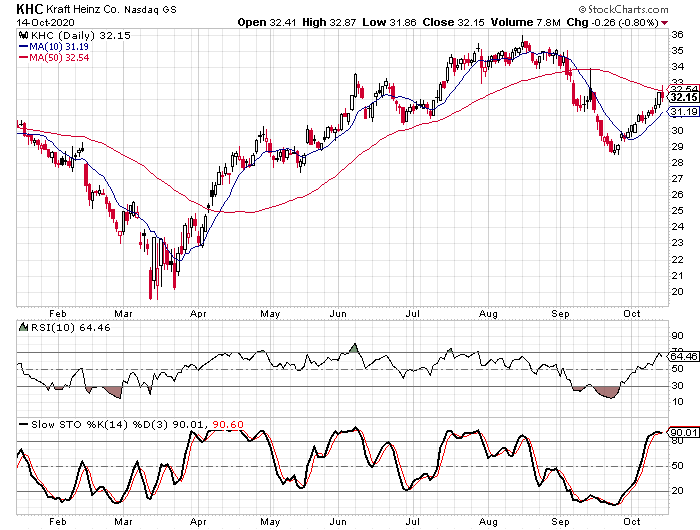 The chart shows how the stock fell from mid-August through mid-September before rallying over the last few weeks. Now the stock is overbought and it is hitting resistance at its 50-day moving average. I am looking for another leg lower over the next month.