All four indices saw their four-day winning streaks come to an end on Tuesday as all four suffered losses. Three of the four dropped from the opening and never managed to move in to positive territory while the Nasdaq spent a great deal of the day in the black before falling at the end of the day.

Nine of the 10 sectors moved lower on the day with only the communication services sector moving higher by 0.10%.

Citigroup and JPMorgan Chase kicked off earnings season yesterday morning and even though they beat EPS estimates, the financial sector took the biggest loss of sectors. The sector fell 1.92%. The energy sector dropped 1.55% and the industrial sector lost 1.11%. Those were the only three that lost more than 1.0%.

My scans turned in the second highest single-day bearish reading in the 11 years that I’ve been running them. There were 230 bearish signals and only three bullish signals. The only bigger bearish list was on September 1, 2011.

The barometer fell dramatically with these numbers being included in the calculation, falling to -107.3 from -24.4.

With so many stocks and ETFs to choose from, I specifically looked more closely at the ETFs. Three of the ETFs that represent the main indices were on the bearish list and eight of the 10 main sector SPDRs were there as well. The one I liked best was the SPDR Dow Jones Industrial Average ETF (NYSE: DIA). 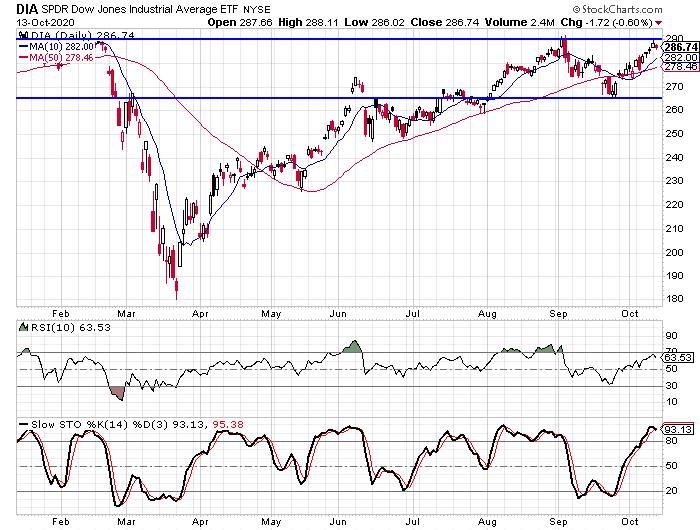 We see how the DIA could be forming a double-top at the $290 area and that would mean the fund would need to drop down to the $265 area to confirm the pattern. The fund moved just above $290 in early September, but then it turned lower and moved lower for 15 trading days. I am looking for a similar move this time around.