Stocks bounced back from Tuesday’s selling with pretty decent rallies for the main three indices. The Russell lagged the others a little, but still logged a gain of 0.20%.

Eight of the 10 main sectors gained ground on Wednesday. The only two that lost ground were the industrial sector (-0.30%) and the energy sector (-0.23%).

The healthcare sector led the way with a gain of 1.61%. The financial sector and the consumer staples sector tied for the second best performance, both registering gains of 1.22%.

My scans were pretty quiet again last night, but they did produce a few more signals than they did on Tuesday. There were four bullish signals and 16 bearish signals.

The barometer dropped pretty sharply once these results were added in to the equation, falling from 73.2 to 35.4.

Out of the 20 signals, only one caught my eye as far as the whole trade setup. The stock was Bill.com Holdings (Nasdaq: BILL) and it appeared on the bearish list. The company fares poorly on the fundamental ratings with an EPS rating of 19 and an SMR rating of a C. 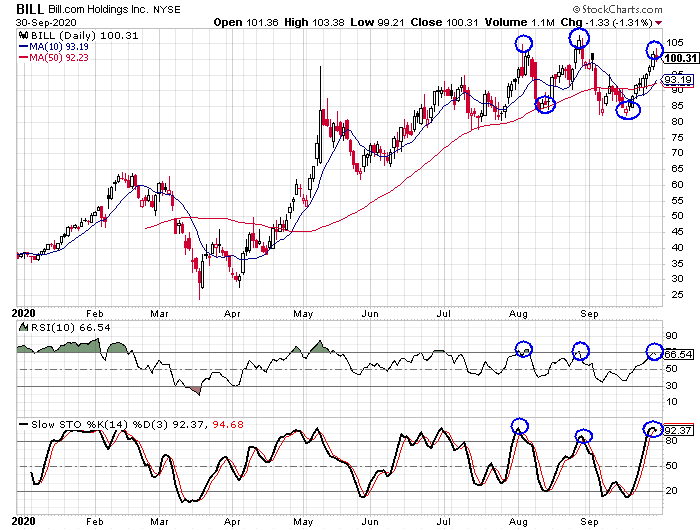 What I saw on the chart was a possible head and shoulders pattern forming. I have marked the various parts of the pattern and it looks like the right shoulder is forming now in the $104 area. For the pattern to be confirmed, the stock will have to drop below the neckline in the $82 area. I also took note of what the oscillators looked like when the left shoulder and the head were formed and where they are now.