The three-day winning streak for the indices came to a halt yesterday as all four of the main indices dropped on the day. All four closed well off their midday lows, but they all dipped in the final hour.

Of the 10 main sectors, the only one that managed a gain was the communication services sector and that was only a move of 0.10%.

The energy sector took the worst hit with a loss of 2.75% as oil fell just over 4% on the day.

The only other sector that lost more than 1.0% was the financial sector which dropped 1.16%.

My scans were rather quiet last night with only seven bullish signals and three bearish signals.

I looked back through results from the last few months and the only thing comparable to such a low total was back on June 12.

What was interesting about that specific date was that it was the day after the huge one-day selloff on June 11.

The barometer remained high with a reading of 73.2, but it did drop sharply from the 104.5 reading on Monday.

Even though there were only two names on the bearish list, I actually liked the trade setup for both of them. I like the setup on Purple Innovation (Nasdaq: PRPL) better than the other one and that is mainly due to the poor fundamental ratings. The EPS rating is only an 8 and the company doesn’t have an SMR rating because it has lost money over the past year. IBD doesn’t give an SMR rating on stocks without an ROE and technically a stock that is losing money doesn’t have one. 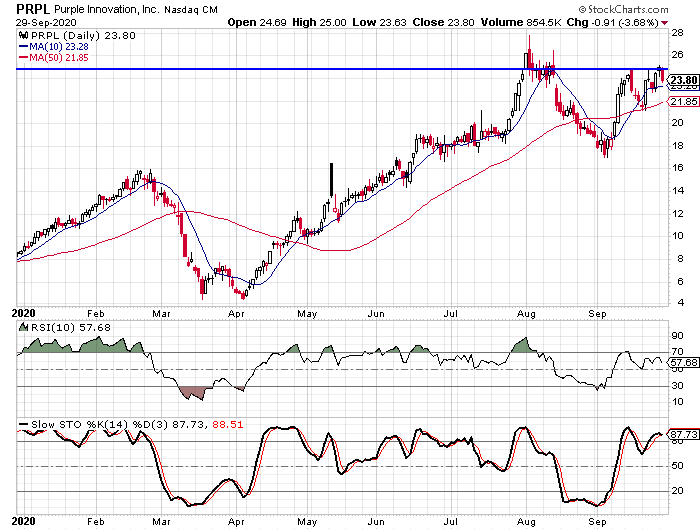 The daily chart shows that the stock struggled to move above the $25 level back in the middle of the month. The stock did move above it on Monday, but then pulled back sharply yesterday. We could be looking at a double-top formation here and for the pattern to be confirmed the stock would need to drop below the low between the two highs. To do that, the stock will need to move below the 50-day moving average and if it does that we could see the selling accelerate.