The rally from Friday carried over to Monday and we saw big gains across the board for the indices. They opened sharply higher and stayed there throughout the day.

It did move above it during the day, but it didn’t manage to close above the trend line.

All 10 main sectors moved higher on Monday and three gained over 2.0%. The trio was led by the energy sector which gained 2.39%.

Just behind the energy sector was the financial sector which gained 2.38% and the consumer discretionary sector gained 2.14% to round out the top three performers.

Only two sectors failed to gain at least 1.0%. The utilities sector gained a meager 0.26% and the healthcare sector gained 0.89%.

My scans remained strongly optimistic on Monday with 103 bullish signals and not a single bearish signal.

The barometer continued to climb as a result of the bullish signals. The final reading on Monday was 104.5, up from 89.8 on Friday.

As you might guess, today’s trade idea is a bullish one and the company is AbbVie (NYSE: ABBV). The company scores a 94 on the EPS rating system, but it doesn’t have an SMR rating. That’s because IBD doesn’t show an ROE for the company. Usually that happens when the company is losing money, but that isn’t the case here. AbbVie earned $2.34 per share in the most recent quarter and that was an increase of 4% over last year. The other parts of the SMR rating are good with a profit margin of 43.8% and sales jumped by 26% in the most recent quarter. 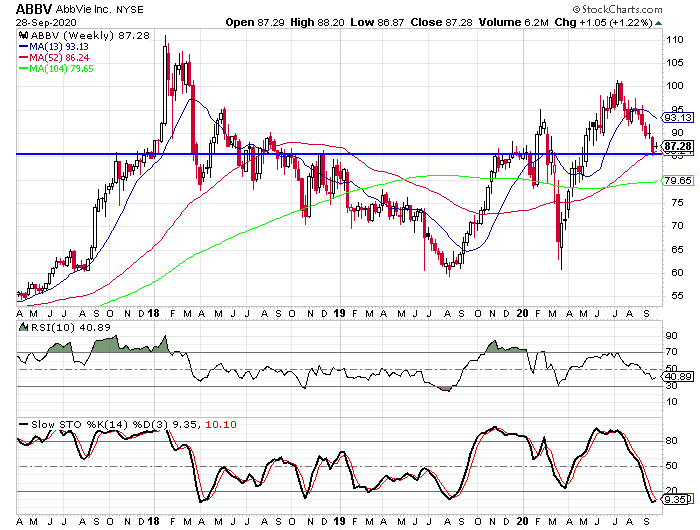 I felt the weekly chart for AbbVie showed why I’m bullish on the stock at this time. Yes the stock appeared on my daily bullish list, but we see that the stock just bounced off of its 52-week moving average. The $85 is also important because it acted as resistance on a couple of occasions in the past.

Buy to open the November 85-strike calls on ABBV at $4.90 or better. These options expire on November 20. I suggest a target gain of 100% and that means the stock will need to reach $94.80. That level is just below the February high, so the stock won’t need to break above that high to hit our target.