The break in the selling was a brief one as it only lasted one day. After snapping losing streaks for the indices on Tuesday, all four indices got hit hard again on Wednesday. The selling started relatively early and accelerated as the day went on.

All 10 main sectors took sharp losses with the best performers losing between 1.0% and 2.0%. The healthcare sector took the smallest loss at 1.03% and the consumer staples sector dropped 1.5% as the second “best” performer.

The energy sector tumbled 4.52% as the worst performer on the day and the tech sector fell 3.12% for the second worst loss.

My scans remained positive on Wednesday, but just barely. There were 14 bullish signals and 11 bearish signals.

The barometer moved slightly higher once these results were added in to the equation, rising from 3.1 to 8.9.

With a relatively even group of stocks on each of the lists last night, I must admit I focused on the bearish list after a couple of bullish trade ideas. The signal that I liked best was on iQIYI (Nasdaq: IQ). The Chinese internet firm was on the bearish list and the fundamental indicators are bad. The EPS rating is 28 and the SMR rating is an E. 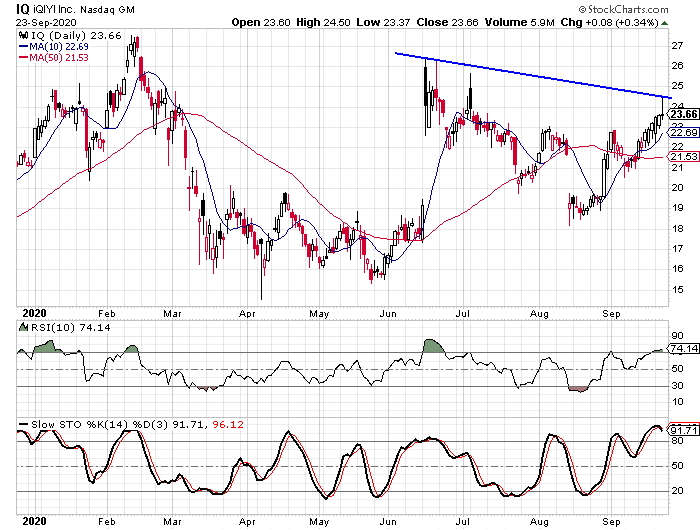 The formation from yesterday’s candlestick caught my attention with the long upper shadow and a small body. What this means is that the open and close were very close, but the stock traded significantly higher during the day. This suggests that the bears took control in the afternoon session and the momentum will likely carry over. We also see that the stock is in overbought territory based on the 10-day RSI and the daily stochastic indicators.