The main three indices snapped four-day losing streaks last night and the Russell snapped a three-day losing streak. All four were in the red at one point during the day, but an afternoon rally helped all four finish with solid gains.

Seven of the 10 main sectors moved higher on the day while three fell. The energy sector dropped 1.03% as the worst performer and it was followed by the financial sector which fell 0.84%. The healthcare sector dropped 0.21% as the third sector that lost ground.

The consumer discretionary sector jumped 2.11% on Tuesday and that was the top performance.

The communication services sector gained 1.93% and the tech sector moved up 1.58% to give us three sectors with gains of over 1.0%.

My scans jumped to a more positive result last night with 46 bullish signals and only seven bearish signals.

The jump in bullish signals was enough to push the barometer back in to positive territory with a reading of 3.1. The reading on Monday night was -19.6.

With the abundance of bullish signals, there were a handful of stocks and ETFs that got my attention. The one I felt gave us the best odds of success was on Best Buy (NYSE: BBY).  In addition to appearing on the bullish list, the company has great fundamental ratings. The EPS rating is a 93 and the SMR rating is an A. 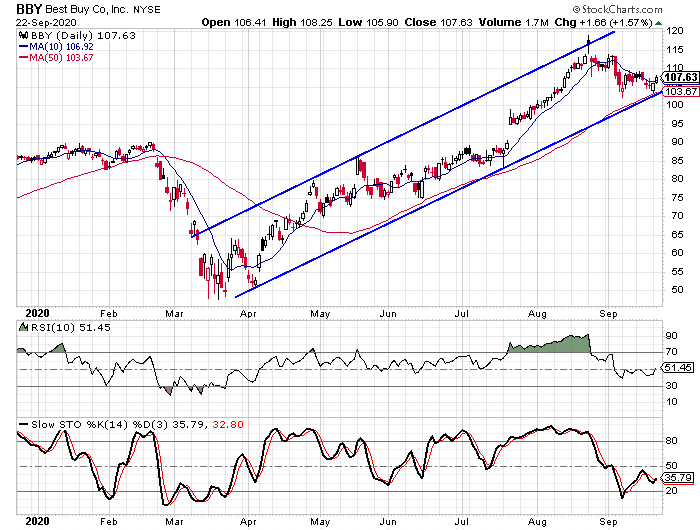 The chart shows how the stock has been climbing higher from its March low with a trend channel forming to define the different cycles within the overall upward trend. The stock just bounced off the lower rail of the channel. We also see that the 50-day moving average is right in the same area as the lower rail, providing a dual layer of support.

Buy to open the November 105-strike calls on BBY at $8.45 or better. These options expire on November 20. I suggest a target gain of 75% and that means the stock will need to reach $119.80. That is above the high in August, but the upper rail of the channel will be much higher than the target in a few days. I suggest a stop at $102.00.