This week got off to a rough start as futures were pointing to a big drop before the equity markets even opened. All four of the main indices dropped sharply out of the gate and three of the four held on to those losses. The Nasdaq trimmed its losses considerably in the afternoon, but still finished with a loss of 0.13%.

The other three indices did move off their lows, but finished with significant losses. The Russell took the worst hit at –3.35%. The Dow dropped 1.84% on the day and the S&P fell 1.16%.

Nine of the 10 main sectors lost ground on Monday with only the tech sector recovering to finish with a gain of 0.86%.

Three sectors took losses of over 3.0% with the worst one being the materials sector which fell 3.35%. The industrial sector dropped 3.34% and the energy sector lost 3.32%.

My scans flipped back to the positive side, but just barely. There were 22 bullish signals and 18 bearish signals which was a surprise given the losses for the indices.

The barometer moved up from -24.9 to -19.6 once these results were added in to the equation.

There was one stock on each list last night that I considered, but the risk/reward scenario for the bullish stock seemed better to me. Workday (Nasdaq: WDAY) appeared on the bullish list and it has great fundamental scores. The EPS rating is 96 and the SMR rating is an A. 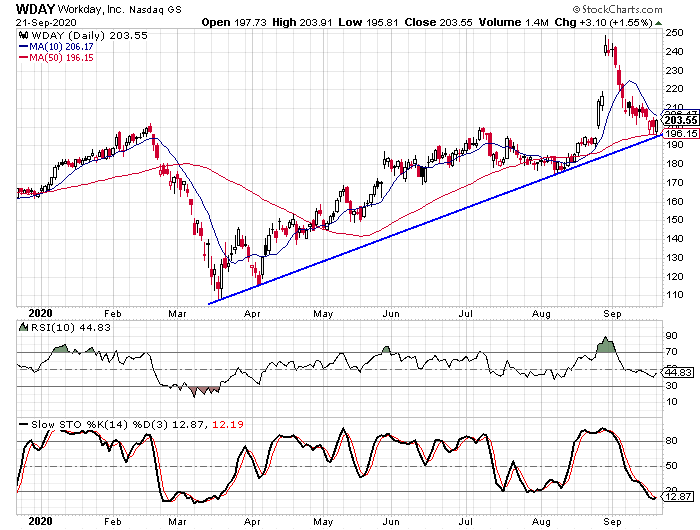 We see on the chart how the lows since March are all connected with one trend line and the stock just hit it yesterday before bouncing. It also helps that the 50-day moving average is right in the same area. The stochastic indicators are the lowest they have been since the March low and they turned higher last night, making a bullish crossover.