Stocks moved higher again on Tuesday, but the gains weren’t nearly as impressive as they were on Monday. All four indices did gain ground on the day, but they finished with much smaller gains than they were experiencing earlier in the day.

As for the sectors, seven moved higher and three moved lower on the day.

The communication services sector led the way with a gain of 1.75% and the tech sector jumped 0.95% as the top two performers.

The financial sector took the biggest hit with a loss of 1.36% and the energy sector fell 0.78% as the second worst performer.

The scans remained positive on Tuesday, but the difference between the lists did drop. There were 40 bullish signals and four bearish signals.

The barometer dropped once these numbers were added in, falling from 67.7 to 60.5.

With the overwhelming number of stocks on the bullish list, today’s trade idea is a sixth straight bullish one. The subject company today is Texas Instruments (Nasdaq: TXN) after it appeared on my bullish list. The company’s fundamental ratings are goo with an EPS rating of 82 and an SMR rating of a B. 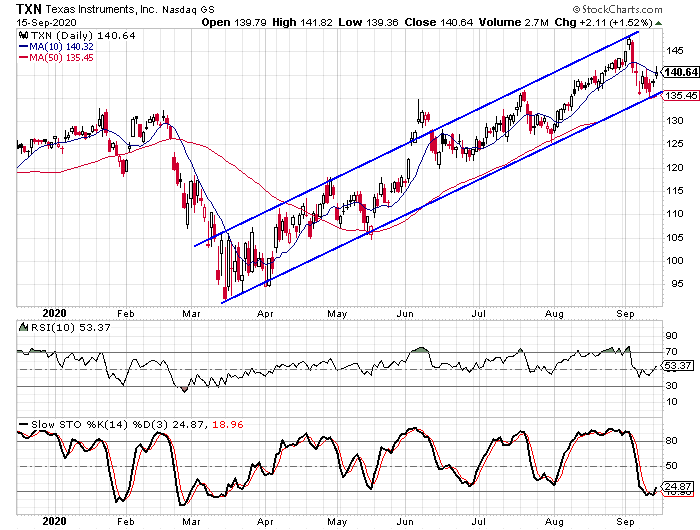 We see on the chart that the stock has been trading in a trend channel over the last six months and it just bounced off the lower rail. The stochastic indicators reached oversold territory for the first time since March and they made a bullish crossover last night. The 50-day is sitting right on top of the lower rail of the channel and that should make the support twice as strong.

Buy to open the November 135-strike calls on TXN at $11.50 or better. These options expire on November 20. I suggest a target gain of 75% and that means the stock will need to reach $155.13. Given the big gains from mid-May to early June and again from late July through early September, I think that target is reasonable. I recommend a stop at $133.50.