The markets jumped higher on Tuesday, but lost some of their footing into the close. With that in mind, let’s look at a few top stock trades for Wednesday. 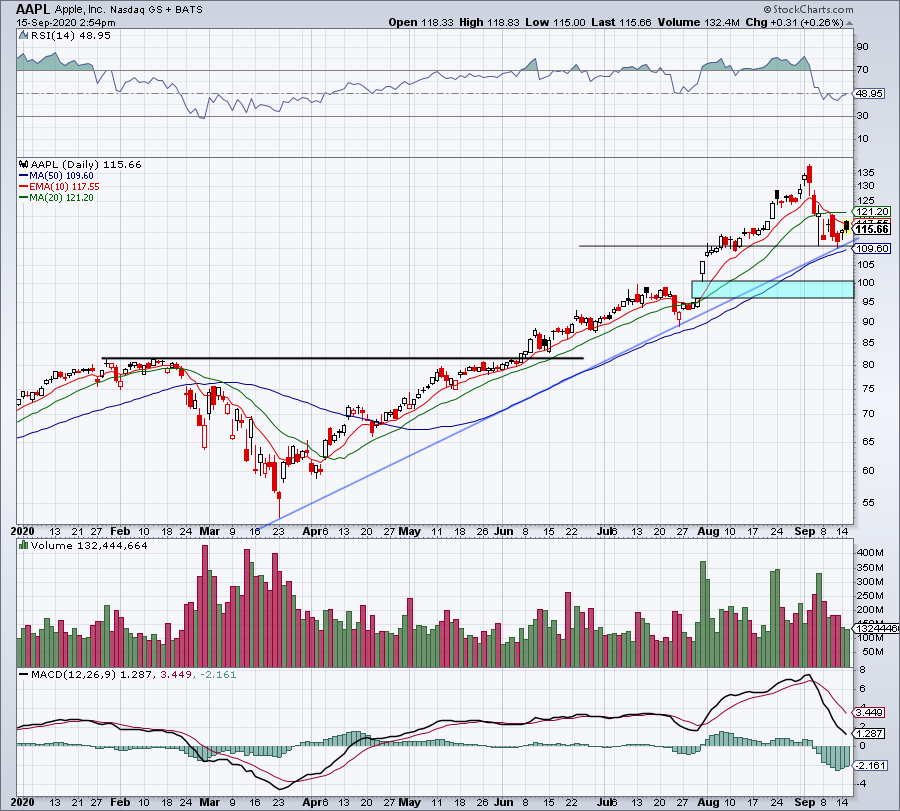 Apple (NASDAQ:AAPL) shares were mixed on Tuesday, trading around flat at the time of this writing after announcing several new products.

If Apple can’t reclaim this mark, it keeps $110 and the 50-day moving average on watch.

Below those figures and we could get a move down toward the $95 to $100 area, allowing Apple to finally fill that gap. 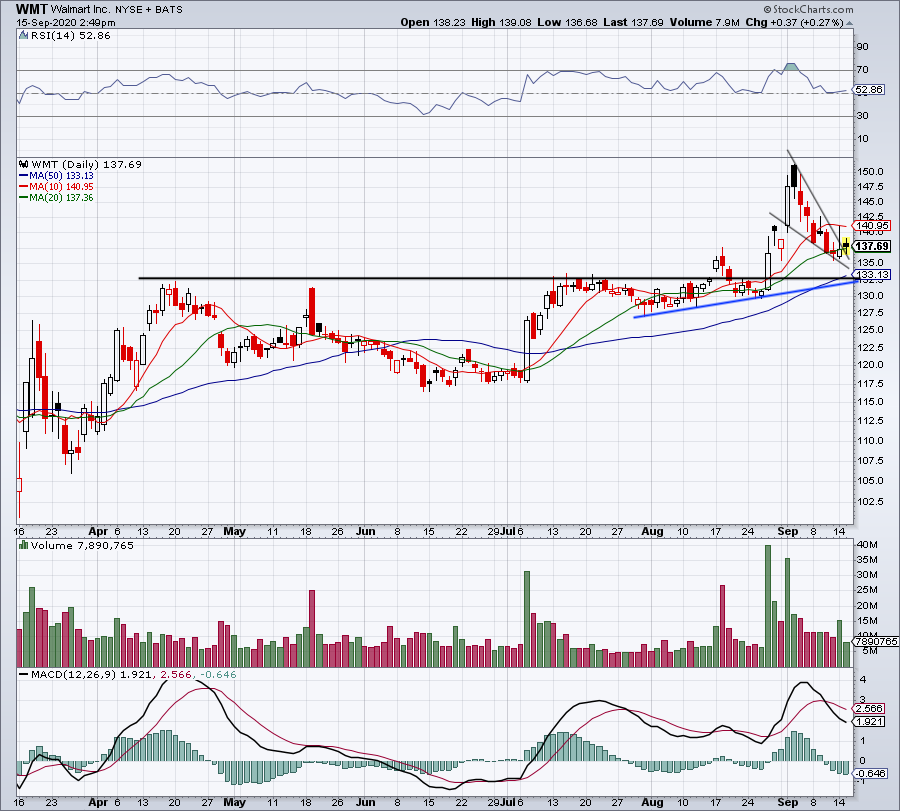 It’s hard not to like Walmart (NYSE:WMT) at this point. Shares spiked to $150 at the start of the month before pulling back.

In doing so, the 20-day moving average has stepped in as a rough level of support, while the 10-day moving average is acting as resistance. We have a falling wedge look on the chart, but in order to feel confident, we need to see some rotation higher.

That starts with a rotation over Tuesday’s high, at $139.08. That’s after a nice little inside day from the prior session. Ideally bulls can get some follow through with a push over the 10-day moving average and a weekly rotation over last week’s high at $142.61.

On the downside, look for a rotation below last week’s low, at $135.55. That doesn’t spell disaster, but it could put the 50-day moving average and uptrend support (blue line) in play.

Below both puts $128 support on the table. 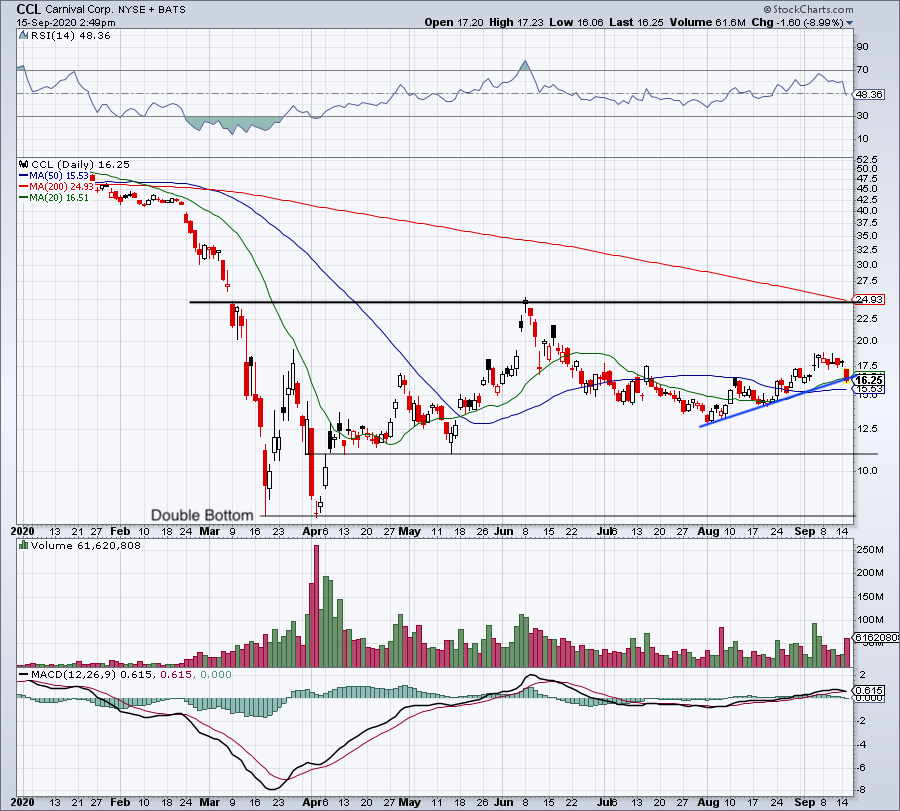 Carnival (NYSE:CCL) stock took it on the chin on Tuesday after announcing a secondary offering. That’s too bad, as shares were consolidating at multi-month highs before the news.

The move has shares trading down into the 20-day moving average and uptrend support (blue line). For bulls, this is a reasonable buy-the-dip spot, but admittedly, one must be bullish to do so. Otherwise, there are likely better opportunities in the market.

Below support puts the 50-day moving average on deck near $15.50. Below opens the door to lower prices, and potentially the August low at $12.83. 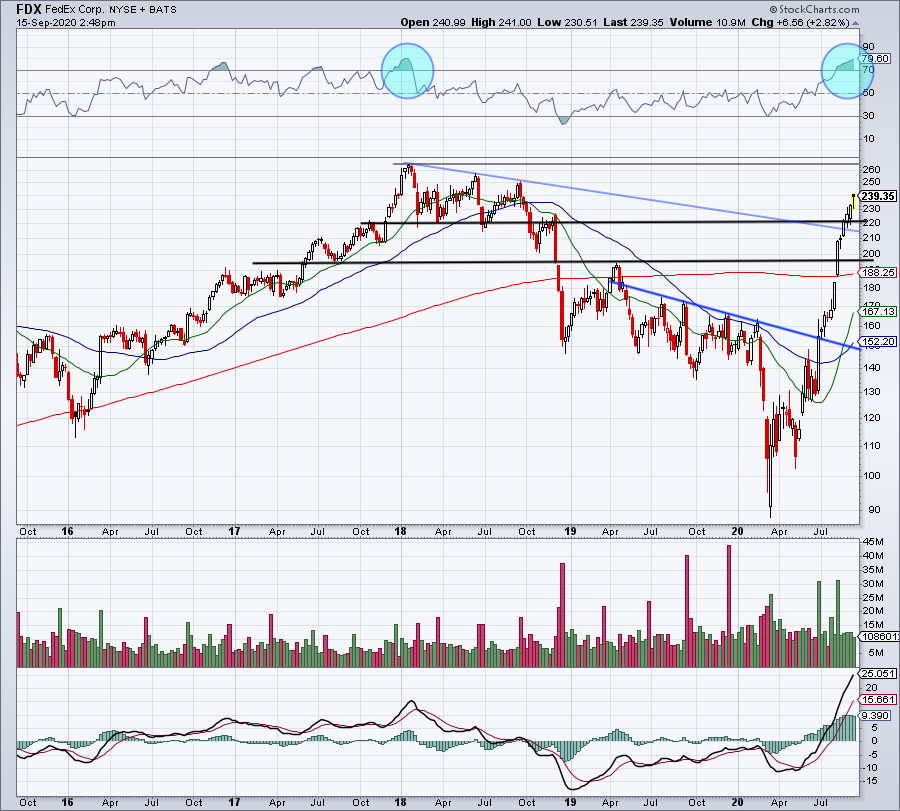 FedEx (NYSE:FDX) is scheduled to report earnings after the close on Tuesday and saying this one has been on fire would be an understatement.

Shares have risen for eight straight weeks and in 11 of the past 12 weeks. It’s up 15 of the last 18 weeks and is working on its sixth consecutive monthly gain.

Sorry for the blitz there, but this name has been incredibly strong. If it keeps up its Hulk-like performance, see if it can clear $250. This was a troubling hurdle for FedEx in 2018, before it went on a precipitous decline.

On the downside, a dip to the $215 to $220 area is still healthy. Below that and $190 to $200 is on the table. Even then, the setup is still okay for the bulls, provided the fundamentals remain intact. That said, it would be nice to see this one cool off just a bit ahead of the fourth quarter and the holidays.