Stocks finished mixed on Friday after opening with gains for all four indices. By the end of the day there were two in the black and two that finished in the red. The Dow led the way with a gain of 0.48% and the S&P eked out a gain of 0.05%.

The Russell took the worst hit with a loss of 0.70% and the Nasdaq joined it in negative territory with a drop of 0.60%.

Eight of the 10 sectors moved higher on Friday while two fell.

The industrial sector led the way with a gain of 1.36% and the materials sector gained 1.28% as the second best performer.

Those were the only two sectors with gains over 1.0%.

The tech sector was the worst performer with a decline of 0.76% and the communication services sector fell 0.32% as the other sector that lost ground.

The barometer jumped 20 points once these results were added to the equation, climbing to 38.7 from 18.7.

Today’s trade idea is the fourth straight bullish one, but with so few bearish signals there just weren’t any on that side of the equation that looked very good. Accenture (NYSE: ACN) appeared on the bullish list and it is a stock I have watched closely for a long time. The company scores an 85 on the EPS rating scale and it gets an A on the SMR grading system. 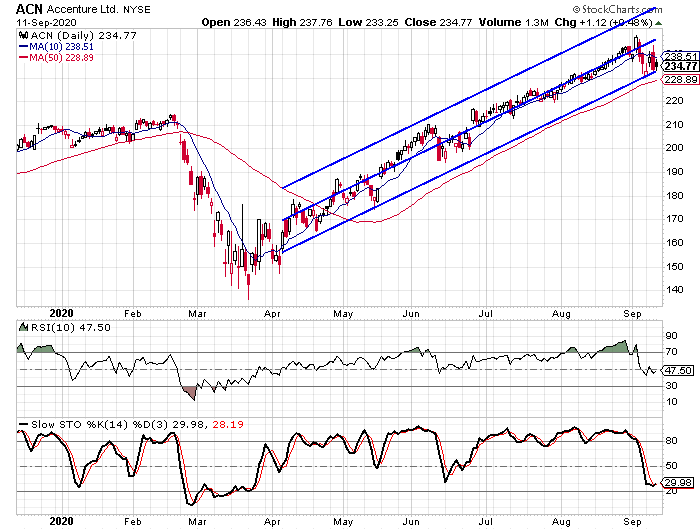