Friends, I am not trying to exaggerate with the title. But there’s no other way to put it when referring to Advanced Micro Devices (NASDAQ:AMD): AMD stock is a must-buy name on the dip.

This stock made a tremendous move from October to February, doubling in that timeframe. It’s not a secret what happened near the end of that span, though.

The novel coronavirus came bombarding into our lives, impacting virtually every business in the world.

However, there are a few catalysts working in AMD’s favor — one of which is the fact that demand has accelerated for its products.

That is the case for Nvidia (NASDAQ:NVDA) as well, as both companies are seeing a tremendously bullish situation unfold in front of them.

Analysts expect revenue to grow 32% this year to $8.92 billion, followed by 23% growth in 2021. For earnings, consensus estimates call for blistering growth of 72%, followed by another robust year of 50% growth in 2021. It’s the exact type of red hot growth stock I like to report on with Investment Opportunities.

These numbers are fantastic, but they’re also up big from where estimates stood earlier in the year. At the start of 2020, analysts expected 2020 revenue of about $6.7 billion in sales. They now expect almost $9 billion in sales this year.

The pull-ahead has been incredible and it’s not temporary; we’re not seeing a reversion next year. Even as all of this was happening, AMD stock wasn’t reacting to this new realization. We’ll cover some of the technicals in a minute, but it took until July for AMD stock to break out over its February highs.

Some may call the current rally insane; I call it deserved.

At a time when companies are struggling to grow, AMD is churning out 30%-plus revenue growth and 70% earnings growth. That kind of growth is hard enough to find without a pandemic, let alone in an economic climate ripe with volatility.

Further, AMD continues to benefit from the missteps of Intel (NASDAQ:INTC). The latter company recently announced a major delay to its 7nm chips, which is a direct benefit to AMD.

Growth and eating away at Intel’s market share? Those check the bullish boxes. But then you start look through the financials and AMD becomes even more attractive. In addition to top- and bottom-line growth, AMD continues to grow free cash flow, while expanding its margins. Over the last few years, it has also been reducing debt and increasing assets. This is a secular growth story with all-over improvements. 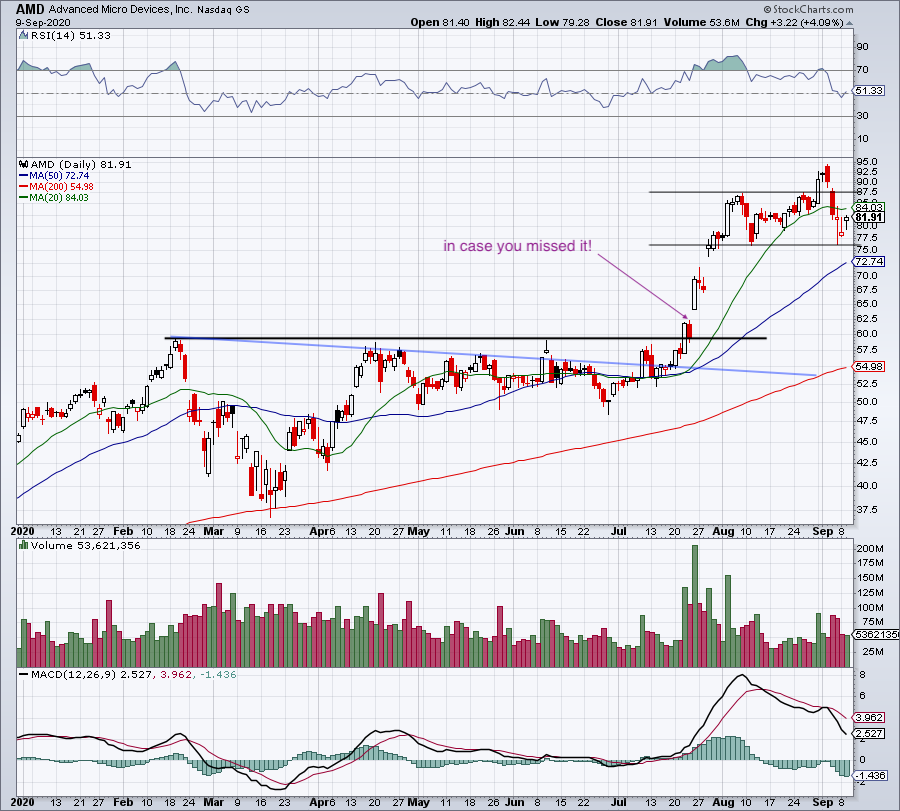 On the chart, you can see where AMD stock topped out in February. After several attempts, the stock finally broke out over the $58 to $60 zone — and it even gave investors a chance to buy in who missed the move!

Then the Intel news regarding its 7nm chip delay sent AMD rocketing higher. A few days later, earnings were the catalyst. These types of things happen with high-quality growth stocks. Once the fundamentals and technicals align, it can be like a fireworks show.

After a quick correction from the highs, shares continue to find support in the $76 to $77.50 area. I would love to see AMD stock reclaim the 20-day moving average and resume its march toward $100.

However, should the broader market continue to swoon, investors may get a chance to buy AMD on an even larger dip. In that case, a decline to the 50-day moving average would be the first major area of interest. Beyond that, a gap-fill into the $60’s would be a great opportunity for long-term investors — if that opportunity comes around. It may not.