The losing streak hit three days on Tuesday as the selling pressure that started last Thursday extended past the Labor Day holiday. The bears took control in the early morning hours and futures were deeply in the negative before the market ever opened. This is the longest losing streak for the S&P since June.

All 10 of the main sectors fell on Tuesday with tech taking the worst hit once again. The sector fell 4.52% and it was followed by the energy sector with a drop of 3.64%.

Nine of the 10 fell by more than 1.0% with only the utilities sector failing to hit that mark. Utilities were down 0.56% on the day.

The second smallest loss was consumer discretionary at 1.31%.

The barometer continued to inch toward a zero reading as the difference between the two lists continues to shrink. The final reading on Tuesday was -13.3, up from -19.8.

After three straight bearish trade ideas I have a bullish one for you today. Astrazeneca (NYSE: AZN) appeared on the bullish list last night and the company gets great fundamental scores. The EPS rating is an 82 and the SMR rating is an A. 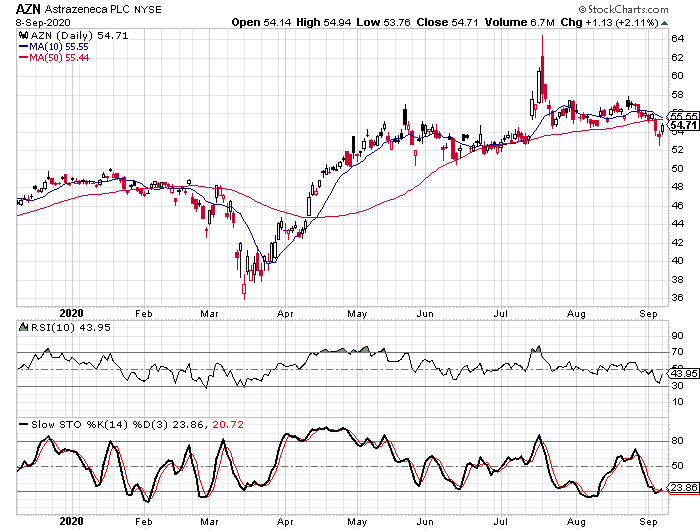 The pattern on the chart got my attention as much as the fundamental readings did. The pattern from Friday where the stock was much lower during the day but rallied to close near where it opened is known as a hammer pattern. The fact that the stock gained ground on Tuesday confirmed the pattern and given the selling that was going on elsewhere, it was an impressive performance.