Stocks saw a second straight day of selling pressure on Friday and all four of the main indices fell once again. The Nasdaq was the worst performer with a drop of 1.27% and it fell 3.27% on the week.

Three of the main sectors managed to post gains on Friday while the other seven fell. The financial sector led the way with a gain of 0.76%.

The industrial sector gained 0.23% and the materials sector joined the other two in positive territory with a modest gain of 0.06%.

The communication services sector fell 1.83% on Friday and that was the worst performance on the day.

The tech sector dropped 1.41% and the consumer discretionary sector declined 1.16%. Those were the only three that saw losses greater than 1.0% on the day.

My scans produced a slight negative result on Friday with a difference of only three. There were 19 bearish signals and 16 bullish signals. The late rally on Friday probably helped the lists from being more negatively skewed.

The barometer moved up once these results were added in to the calculation, from -28.7 to -19.8.

Today’s trade idea is a third straight bearish one and the company is Gap, Inc. (NYSE: GPS). The fashion retailer appeared on the bearish list on Friday and its fundamental indicators are pretty weak. The EPS rating is extremely low at 7 and the SMR rating is a C. 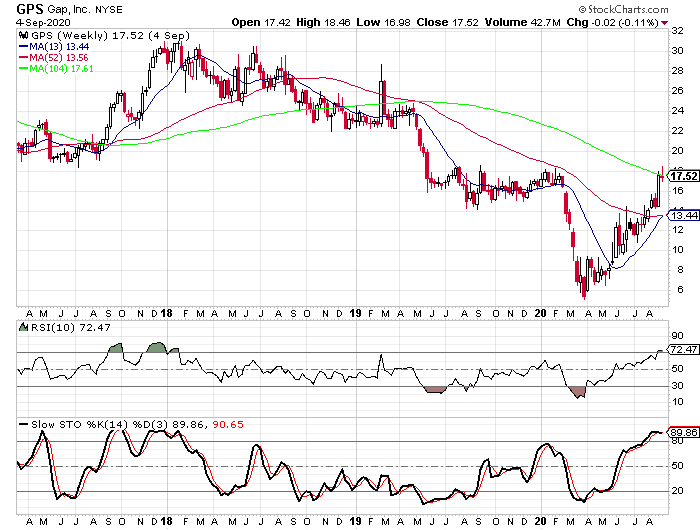 While Gap got on my radar because of the daily chart, I felt like the weekly chart made a more bearish case. We see how the stock has rallied off the March low, but it now faces resistance from the 104-week moving average. The 10-week RSI and the weekly stochastic indicators are in overbought territory currently. The daily stochastic indicators are in overbought territory as well and they made a bearish crossover on Friday.