For the first time in three months stocks came under some serious selling pressure on Thursday. All four indices dropped sharply and they closed near the lows of the day.

All 10 main of the main sectors fell on the day and three of them lost over 3.0%. The tech sector dropped 5.7% and that was by far the worst performance. The communication services sector fell 3.39% as the second worst performer and the consumer discretionary sector declined 3.17%.

The energy sector experienced the smallest drop at 0.74%. That was the only sector that fell less than 1.0%. The utilities sector lost 1.13% and that was the second smallest loss.

The barometer dropped to -28.7 as a result of the more bearish results and that ended the trend of the indicator inching back toward a more neutral reading.

None of the five stocks on the bullish list looked very promising and so today’s trade idea is a bearish one and it snaps the streak of flipping back and forth between bullish ideas and bearish ideas. Today’s subject company is Uber Technologies (NYSE: UBER) and it appeared on the bearish list last night. The company’s fundamental ratings are pretty bad with an EPS rating of 22 and an SMR rating of an E. 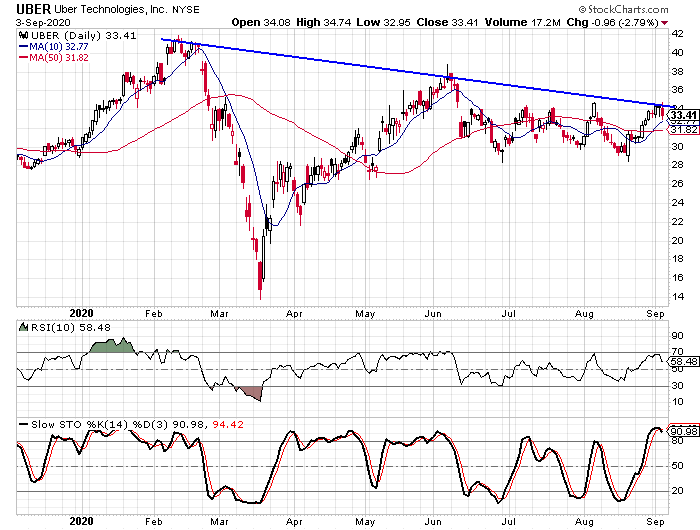 The daily chart shows how the closing highs from February and June connect with a downward sloped trend line and the stock just hit that line before turning lower. The daily stochastic indicators are in overbought territory and made a bearish crossover yesterday and the 10-day RSI was near overbought territory before turning lower yesterday. Those indicators were in a similar position in early August before the stock dropped from $34.80 to $28.48.