Stocks jumped on Wednesday with all four indices seeing significant gains again. The Nasdaq and Russell were in the red in the early going after leading the way yesterday, but they turned it around in the afternoon. The placements were flipped from yesterday though.

Nine of the 10 main sectors moved higher on the day, but the utilities sector really stood out with a gain of 3.11%. Materials gained 2.27%, the communication services sector jumped 2.13%, and the healthcare sector tacked on 2.0% to give us four sectors with gains of at least 2.0%.

The energy sector was the lone sector in the red on the day with a loss of 0.48%. The tech sector had the second worst performance, but that was a gain of 0.89%.

My scans were negative again on Wednesday with 35 bearish signals and 15 bullish signals.

Despite the fourth straight negative result from the scans, the barometer continued to climb toward a more neutral reading. The final figure for last night was -19.8 and that was up from -23.3 the night before.

Keeping with the pattern that has played out over the last five days of trade ideas, I have a bearish trade idea for you today. I have alternated between bullish and bearish trades over the last five days. Today’s subject company is Slack Technologies (NYSE: WORK) and it scores a 2 on the EPS rating scale with a D in the SMR grading system. The company is set to report earnings after the close on Tuesday, so this is a riskier trade than usual. 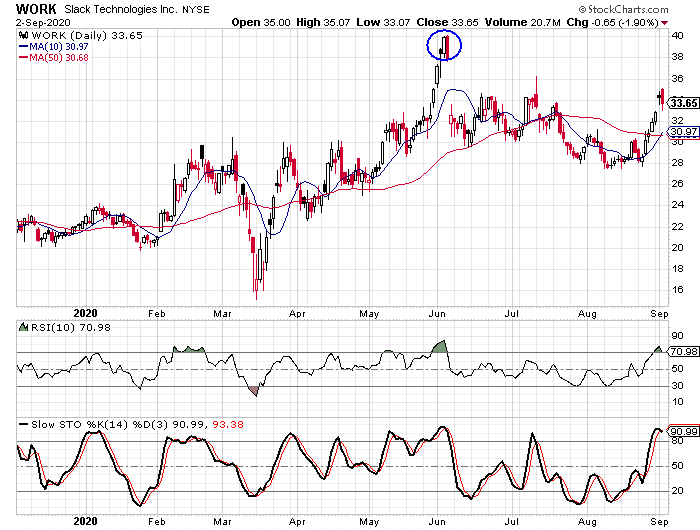 Looking at the daily chart we see the previous earnings report circled in blue. The stock dropped over 25% from the high just before the report to the low a week later. We also see that the oscillators are hitting overbought territory just as they did before the last earnings report. The pattern formed by yesterday’s candlestick is a bearish engulfing pattern and is generally viewed as a reversal pattern.