Tuesday saw all four indices move higher and all of them saw substantial gains. The bigger gains were had by the two riskier indices while the two more conservative indices saw smaller gains.

Seven of the 10 main sectors moved higher on the day with the materials sector leading the way.

The sector jumped 2.81% and hit an all-time high in the process. The Tech sector experienced the second best gain of 1.91%.

The utilities sector fell 1.15% as the worst performer and the healthcare sector dropped 0.90%. The energy sector was the third sector to lose ground with a decline of 0.67%.

My scans produced another negative result, but they continued to trend toward a more neutral net total. There were five bullish signals and 19 bearish signals.

The barometer moved up a little after these results were added in to the calculation, moving from -26.8 to -23.3.

With only 24 stocks to choose from between the two lists, there were only two that got my attention. One on the bearish and one on the bullish side on Etsy (Nasdaq: ETSY). Etsy appeared on the bullish list and it has mixed fundamental readings. The EPS rating is only a 43, but the SMR rating is much better at an A. 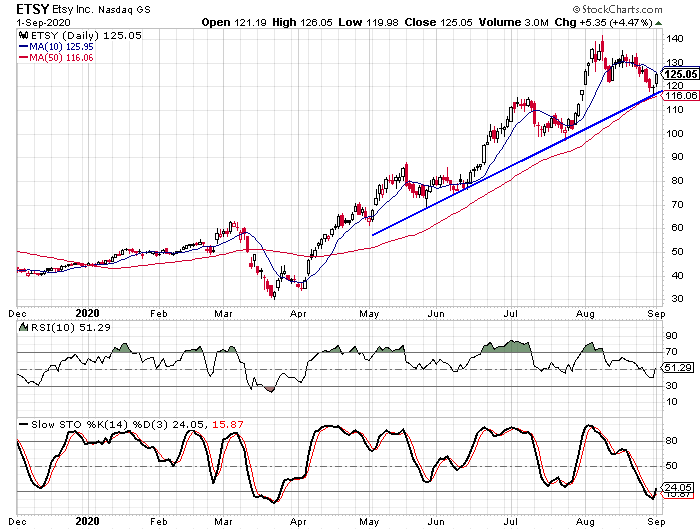 The daily chart shows how the stock has rallied sharply off of its March low, more than quadrupling since then. A trend line has formed over the last three and a half months. It connects the lows from each month and the stock just hit the line on Monday. The stock bounced yesterday and the daily stochastic indicators made a bullish crossover out of oversold territory.