Stocks got hit pretty hard the opening yesterday as the GDP report showed a contraction of 32.9% and the initial jobless claims came in higher than expected. All four indices experienced sharp losses, but all four made comebacks and the Nasdaq ended up in positive territory.

There were also a ton of earnings reports due out last night and Facebook, Apple, Amazon, and Alphabet all exceeded expectations.

The tech sector tacked on 0.56% as the top performer and the communication services sector gained 0.28% as the other one in the black.

The energy sector dropped 3.93% as the worst performer and the materials sector fell 1.94%. Financials fell 1.80% and industrials declined 1.0%.

My scans swung back to the bearish side last night with 19 bearish signals and 11 bullish signals.

The barometer inched a little higher with these results added in, moving up to -2.6 from -4.6.

There weren’t any trade setups that I liked on the bearish side last night and there was only one on the bullish side. The only one I liked was on Citrix Systems (Nasdaq: CTXS). The stock appeared on the bullish list and the company has strong fundamental ratings. The EPS rating is a 93 and the SMR rating is an A. 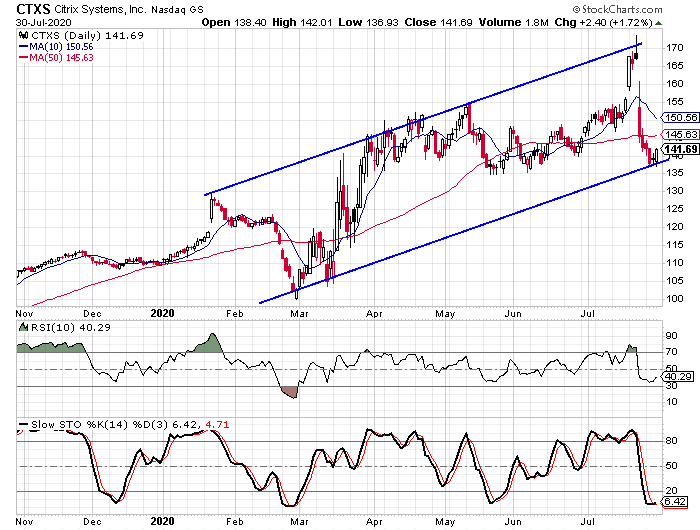 The daily chart shows how the stock rallied sharply from its February low. The trend line that connects the highs over the last six months could be forming an upper rail. The lower rail is a little questionable at this point as it is just a parallel line to the trend line connecting the highs at this point. The stochastic readings are in oversold territory and just made a bullish crossover. That has only happened twice in the last six months.

Upgrades and Downgrades for Tuesday, 7/27