As we hit the halfway point of earnings season, things seem to be going well on Wall Street. Those crafty analysts seem to have worked their magic once again by revising expectations so low that more than 80% of companies have been able to beat expectations.

Take Starbucks (NASDAQ:SBUX) for instance. SBUX reported quarterly earnings on Tuesday, after market close, and the company beat revenue estimates by $80 million and non-GAAP earnings estimates by $0.15 per share — coming in at $4.22 billion and -$0.46 per share, respectively.

SBUX rose over 3.5% yesterday as a result, and since it is about to pull back slightly, this is the perfect time for a put write.

What We Mean by “Crafty Analysts”

You might be wondering how negative earnings per share can be good news. After all, aren’t negative numbers bad? In most cases, they would be.

But analysts expected SBUX to post non-GAAP earnings of -$0.61 per share, and they had been positioning themselves accordingly.

Only losing $0.46 per share doesn’t seem so bad. That’s a much easier hole to climb out of in the future.

Low expectations are easier to clear, but that doesn’t change the headlines that read “Starbucks Beats Earnings Expectations.” That news generates enthusiasm.

That may seem like a small thing — the most notable improvement is in the bottom of the range — but as we said in the first quarter, guidance alleviates uncertainty.

And now that companies actually have some idea about the effects of the COVID-19 pandemic, that guidance could even be more accurate.

SBUX has established a strong support level at $72, which should hold in the near term. The stock has been trending sideways since May, and it would take some very bad news to push it lower. 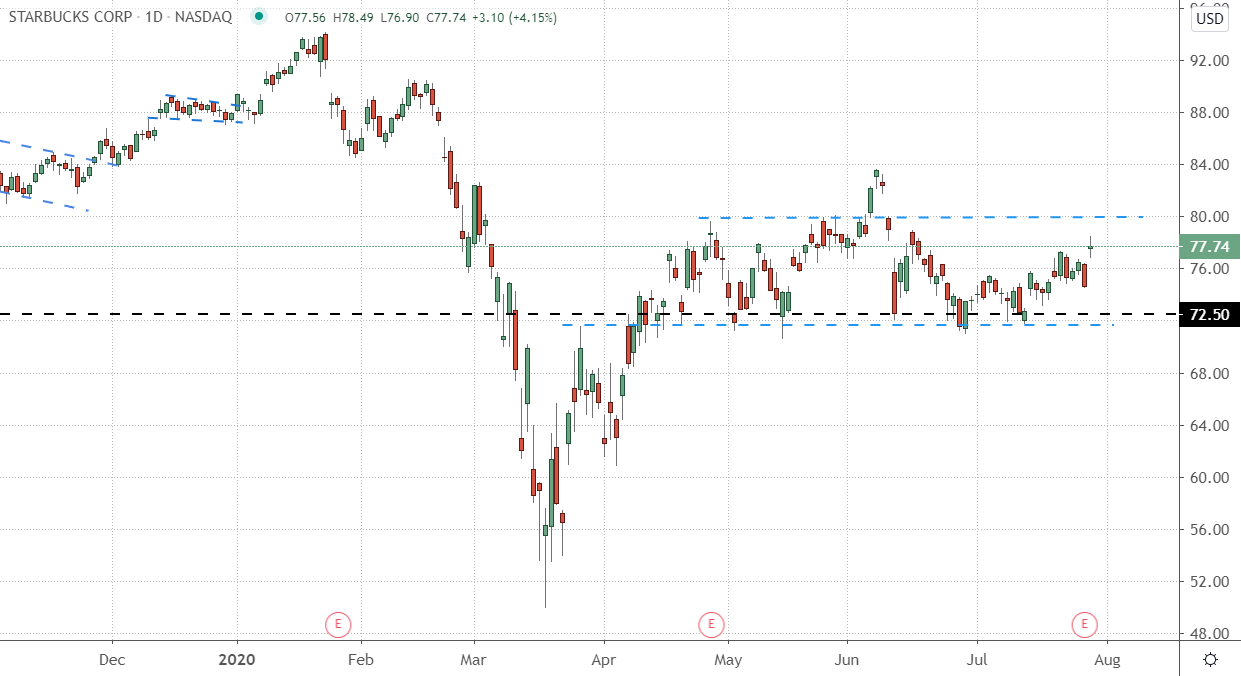 Unfortunately, there aren’t any options with a $72 strike price. The closest strike price is $72.50, and it has 15-20 times the open interest as the other strikes, which should make it easy to get in to and out of a position at that level.

And though you’re probably tired of hearing us say this, it’s still very important: Don’t obligate yourself for too long in this position.

We’d recommend looking for an expiration in mid-August, but don’t set yourself up to hold this trade for longer than a month.