Stocks gained ground on Wednesday and that keeps the string of alternating from losses to gains alive at four days. The Fed meeting ended with no change to rate and that was as expected. There was very little reaction when the decision was announced, the indices increased slightly after the announcement, but not greatly.

All 10 sectors moved higher on Wednesday, but there was a rather wide range in the results.

The energy sector led the way with a gain of 2.09%. The financial sector was the second best performer with a jump of 1.87%.

The consumer staples sector registered the smallest gain at 0.14% and the other defensive sector, utilities, only moved up by 0.46%.

My scans finally flipped to the plus side last night, ending eight straight days of bearishly skewed results. There were 31 bullish signals and seven bearish signals.

The barometer jumped a decent amount, but it remained in negative territory. The final reading was -4.6, up from -30.5 on Tuesday.

Given the number of bullish signals versus bearish signals, it shouldn’t be a surprise that today’s trade idea is a bullish one. The subject is the iShares China Large-Cap ETF (NYSE: FXI). While the ETF appeared on the bullish list last night, there have also been a number of large cap Chinese stocks on the bullish list each of the last three nights. 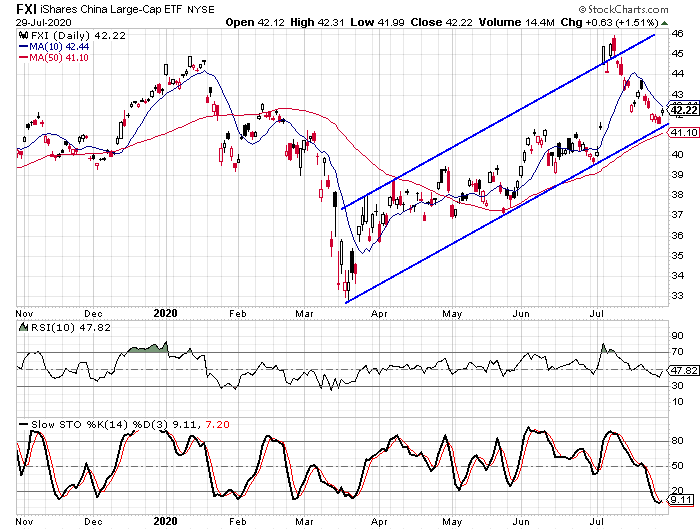 The daily chart shows how the fund has formed a trend channel since bottoming in March and it was right above the lower rail before turning higher yesterday. The stochastic indicators are in oversold territory and at their lowest level in almost a year. The indicators made a bullish crossover last night and I look for the fund to rally sharply over the next few months.