Uncertainty returned to market on Tuesday and all four of the main indices moved lower on the day. The S&P was the only one of the bunch that managed to hit positive territory at any point during the day. Don’t expect the market to get any calmer in the next few days with a Fed announcement tomorrow and a number of FANG stocks reporting on Thursday.

Sector performances flipped from Monday with eight moving lower and only two moving higher. The defensive sectors were the only two in the black with utilities gaining 1.49% and consumer staples tacking on 0.37%.

The materials sector took the biggest hit with a loss of 2.20% and it was followed by the energy sector with a decline of 1.76%.

The tech sector fell 1.17% and the communication services sector dropped 1.03% to give us four sectors that lost over 1.0%.

My scans remained bearishly skewed last night, but the difference between the two sides was the smallest it has been in seven trading days.

There were 33 bearish signals and 15 bullish signals.

The barometer continued to push higher after these results were added in to the calculation, moving up to -30.5 from -40.6.

Today’s trade idea is a bearish one and it is a company I recently wrote about on another site. Huntsman (NYSE: HUN) announced earnings yesterday morning and initially gapped higher on the report. The company’s fundamental ratings show an EPS rating of 39 and an SMR rating of a C.

To fully show what I see about Huntsman that makes me bearish I feel the need to share both the daily and the weekly charts. After gapping higher, the stock moved sharply lower throughout the day and finished with a loss of over 5%. The pattern it formed is a bearish engulfing pattern and suggests more downside is coming. 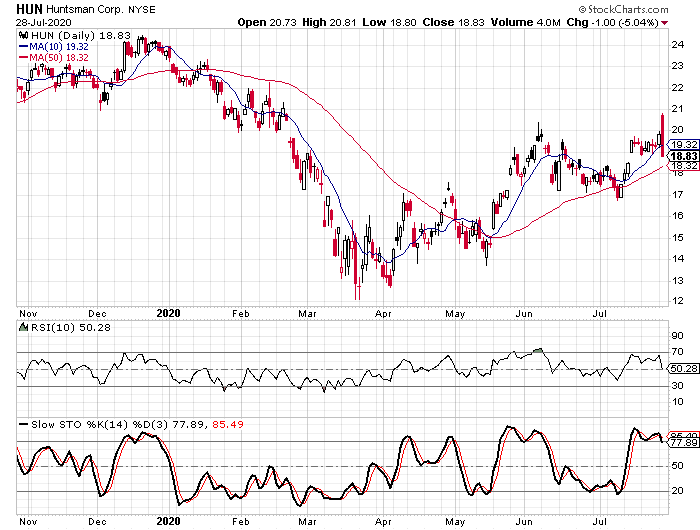 The weekly chart shows a downward sloped trend channel that has formed over the last two and a half years. The gap higher took the stock above the upper rail temporarily, but the reversal took it back down in to the channel. 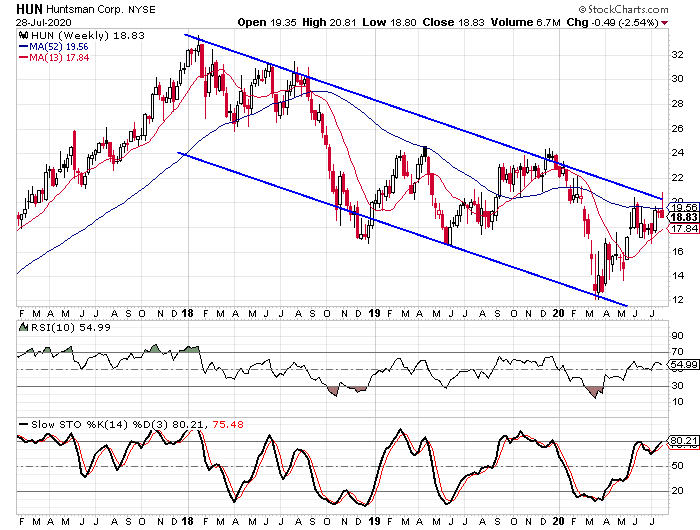 We see similar moves at different points over the last few years before the stock rolled over. I look for Huntsman to move considerably lower over the next couple of months.