This is going to be a big week on Wall Street. Now that the Republicans in the Senate have finally agreed on the new coronavirus stimulus package they want, the negotiations with the Senate Democrats can begin. It should be interesting to see where they land.

A lot of companies will report earnings this week, too, including 40% of the companies that make up the S&P 500.

So far, traders haven’t been discouraged by the lackluster numbers of this earnings season. We’ll see if that trend continues.

In today’s trade, we’re looking to take advantage of an earnings announcement that is a little farther down the road.

Target (NYSE:TGT) is scheduled to release its quarterly numbers on Aug. 19, before market open. We expect the company to meet expectations, and we can collect on that possibility now by selling a put write with an expiration just after TGT reports.

Retail workers are losing their jobs across the country, but TGT has stayed relatively strong because it invested in its online shopping infrastructure.

That means that the company could be one of the many that transitions in-store workers to e-commerce roles, and it gives TGT a way to compete with Amazon (NASDAQ:AMZN).

Plus, as we reminded you earlier this month, the consumer is relatively strong for now. Though we’ve seen some elevated unemployment claims numbers since we last recommended a position on TGT, it’s important to remember that the data in those reports is noisy.

And because TGT is considered an essential business, the company will remain open if elevated COVID-19 infection rates lead to more lockdowns.

As we said in our last recommendation, TGT should keep consolidating until earnings. If the stock meets expectations, it should stay in the same consolidation range it has been in since its last earnings announcement, even with some post-earnings profit-taking.

We’re encouraged by TGT because it is trying to break above the down-trending resistance level it has been interacting with since mid-May. You can see the intraday surge the stock made on Friday, July 24, which pushed the stock above resistance and set a higher intraday high than the stock reached on June 23. Resistance breaks and higher highs are always a good sign. 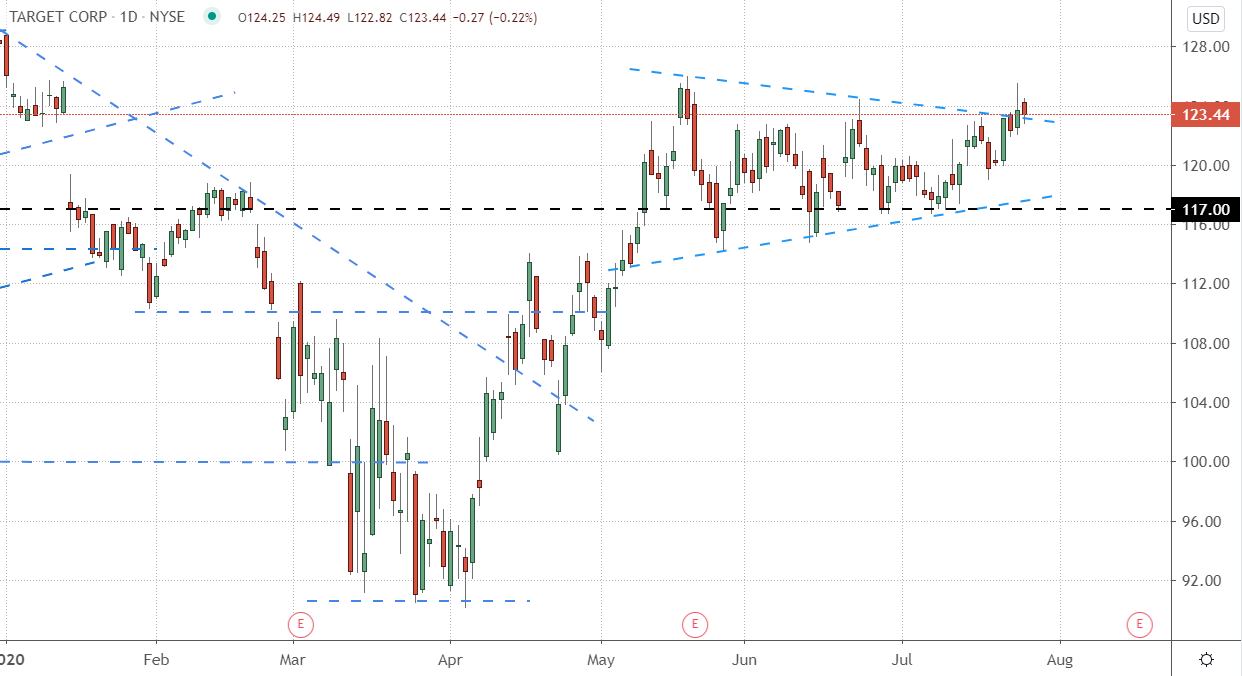 However, we also don’t want to get ahead of ourselves and get too bullish with this trade. Even though we’ve seen this recent bullish surge, we wouldn’t be surprised to see TGT continue bouncing back and forth as it slowly climbs higher in the long run.

If you’re looking for a strong support level to serve as a strike price for a naked put write, the $117 level might be your best option. It lines up with the bottom of the gap TGT formed in January, and it has since served as up-trending support for the stock.

As we said earlier, we’re looking to maximize our income by selling a put write that expires after TGT reports earnings, but we don’t think you should look too far into the future. Late August expirations work best.