The indices picked right back up where they left off before the holiday and all four saw significant gains. The S&P gained 1.59% and that is its fifth straight day of gains. The index hasn’t had a five-day winning streak since December.

The Nasdaq led the indices on Monday with a gain of 2.21% and the Dow posted a gain of 1.78%. The Russell was the biggest laggard of the bunch, but it still tacked on 0.77% on the day.

Nine of the 10 main sectors moved higher and this time it was the utilities sector that was in the red with a loss of 1.23%.

The second worst performance was a gain of 0.29% and that was from the energy sector.

The consumer staples sector gained 0.49% and was the only other sector that failed to gain at least 1.0%.

The consumer discretionary sector led the way with a gain of 2.37% and the communication services sector jumped 2.01%. The financial sector almost gave us a third sector with a gain of over 2.0%, but it came up just short with a gain of 1.92%.

My scans produced another night of bearishly skewed results with five bullish signals and 35 bearish signals on Monday night. With the sharp rally over the last few weeks, many stocks and ETFs are overbought at this time.

The barometer dropped sharply again and this time it fell in to negative territory. The final reading was -0.9, down from 43.0 on Thursday and 83.0 on Wednesday.

Among the bullish signals were two different ETFs related to the Japanese market. The one I liked best was the iShares MSCI Japan ETF (NYSE: EWJ). We don’t have fundamental ratings because it’s an ETF, but Tickeron, the AI site I use, showed a bullish signal on the EWJ as well. Based on the last 100 signals, the prediction puts the odds of an upward move at 69% over the next month. 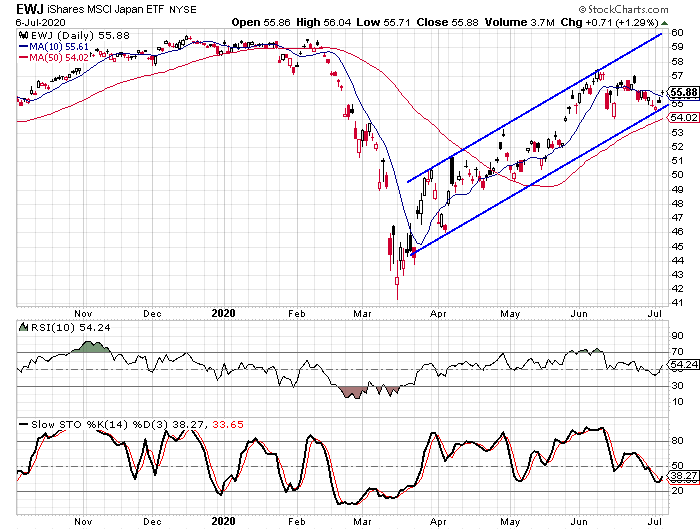 What got my attention the most was the trend channel that has formed over the past few months. The stock just hit the lower rail a few days ago and has turned higher since then. We see that the stochastic indicators were trending lower but made a bullish crossover last night.

Buy to open the August 54-strike calls on EWJ at $3.00 or better. These options expire on August 21. I suggest a target gain of 100% which means the fund will need to reach $60. This would mean the fund had reached the upper rail of its channel and it would be at the high we saw in December. I recommend a stop at $54.50.