Shares of Advanced Micro Devices (NASDAQ:AMD) have certainly struggled since the company released earnings in late April. Both the top and bottom line were pretty much in line yet shares have fallen sharply since then. Certainly just meeting expectations can be a reason for AMD stock to lose ground.

The selling pressure has now gotten a little extreme, though, especially considering Advanced Micro is still expecting to grow revenues 20% to 30% for 2020.

Look for AMD stock to head higher over the near-term.

The technicals on Advanced Micro are starting to look rather bullish. AMD stock once again held the major support area at $50.

Both momentum and money flow are turning higher after reaching oversold levels. MACD is firming and looks poised to generate a buy signal on any further strength. Shares just broke through the 50-day moving average at $50.97 which should lend additional downside support. 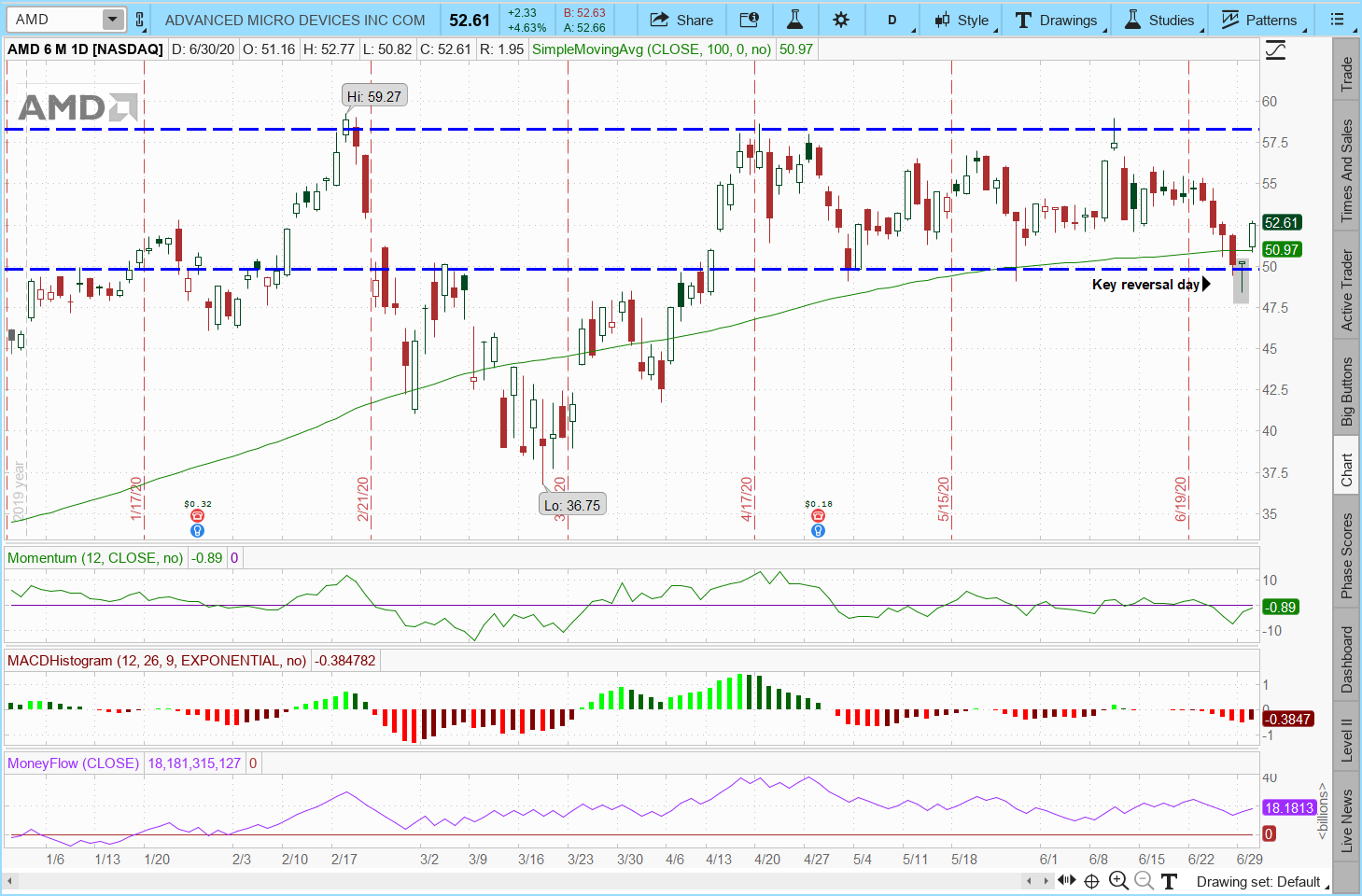 More importantly, AMD stock saw a key reversal day on Monday. Advanced Micro opened near $50 and then dropped all the way through support to $48.42. Shares then pivoted sharply to close on the highs of the day at $50.28.

This type of key reversal pattern is many times a sign that the previous trend has come to an end. The sellers have become exhausted and the buyers have assumed control. It is even more powerful given that it took place right at major support.

InvestorPlace contributor Nicolas Chahine put together an outstanding comparative on AMD stock versus major competitor Nvidia (NASDAQ:NVDA). He points out that although AMD stock may look expensive on an actual basis, it is actually rather cheap on a comparative basis. Mr. Chahine also touches on the importance of technical analysis in this machine-driven trading environment. It’s difficult to argue with either of those points.

Certainly AMD stock has been a laggard to the other major chip stocks over the past several months. The comparative chart highlights the underperformance of AMD to the Semiconductor ETF (NASDAQ:SMH) of which AMD is a component. Normally AMD tends to correlate with the SMH, which makes sense. Recently, however, that correlation has broken down with SMH far outperforming AMD. The divergence has now reached an extreme similar to what we saw in late January (gray box on comparative chart). Look for AMD stock to be a relative outperformer over the coming weeks. 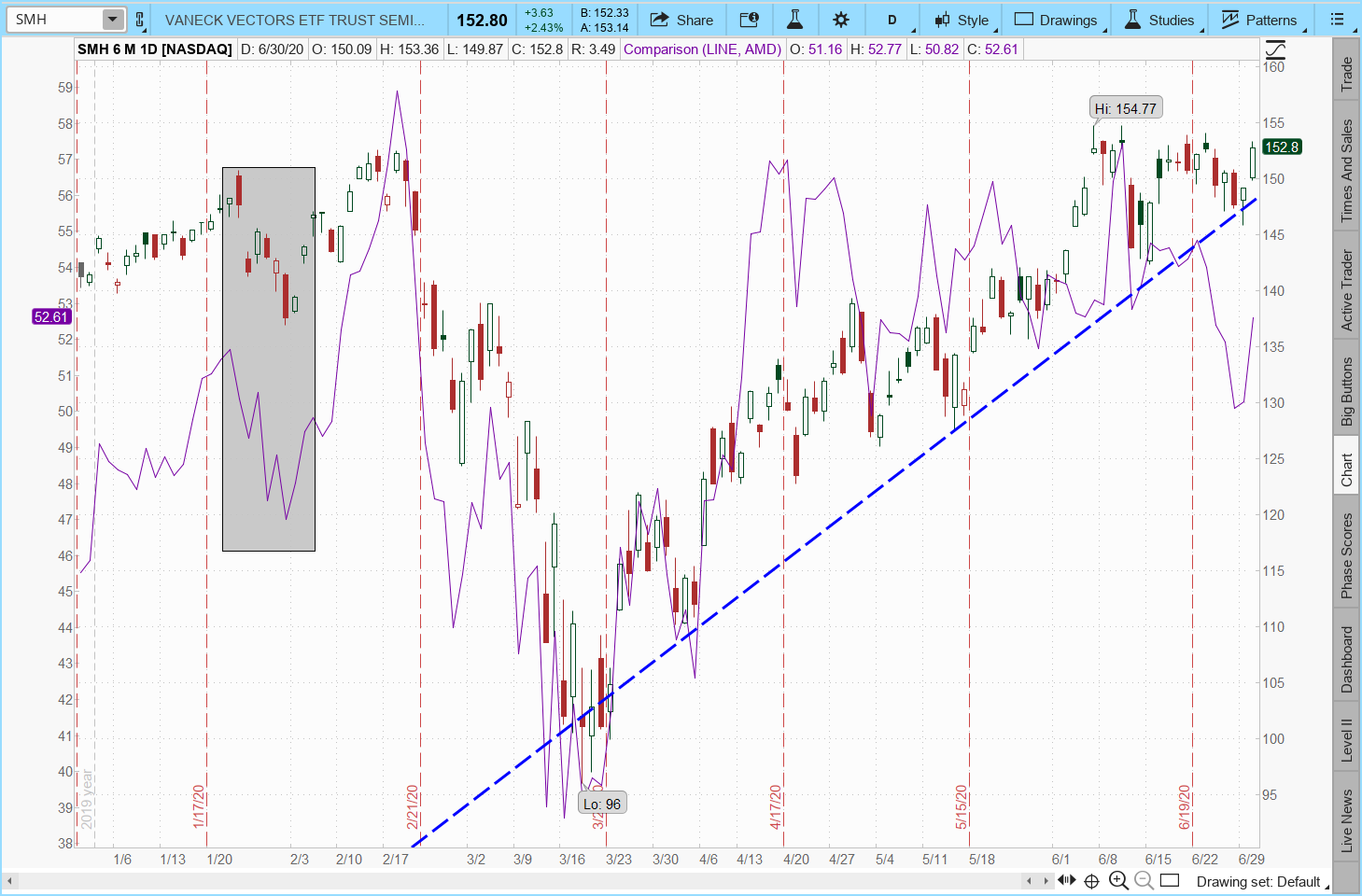 I had a somewhat bearish outlook in my previous article on AMD from April 20. Advanced Micro Devices was trading near $57 at the time, so that bearish outlook proved to be prescient. Now that AMD stock has dropped over 10% from those levels, my outlook has changed to a much more bullish one. Price does matter.

Implied volatility (IV) is still at somewhat elevated levels given the recent weakness in AMD stock. This favors option selling strategies when constructing trades. So to position to be a buyer on further weakness, a short-term bull put spread makes sense. Earnings are due July 28 so you want to have the spread expire before then to lower risk and dampen price volatility.

Maximum gain on the trade is $50 per spread with maximum risk of $150. Return on risk is 33%. The short $49 strike price is below major support and provides a 6.8% downside cushion to the $52.61 closing price of AMD stock. It also expires on July 17 before the next earnings release on July 28 which eliminates any potential earnings related issues.