After a slow start on Monday, stocks rallied in the morning session and we ended up with significant gains for all four of the major indices. The Russell led the way with a gain of 3.08% and it was followed by the Dow with a gain of 2.32%. Boeing helped push the Dow higher with a 14% gain of its own.

The financial sector experienced the second smallest gain at 1.11%.

The top performing sector was industrials with a jump of 3.28% and it was also the beneficiary of Boeing’s move.

The materials sector gained 1.89% as the second leading performer.

My scans turned significantly more bullish on Monday with 190 bullish signals and only two bearish signals.

The barometer jumped from -0.6 to 76.7 once these results were added in to the equation. That’s the highest reading for the indicator since March 25.

There were an abundance of stocks and ETFs to choose from last night, but the one stock that I liked the best was Raytheon Technologies (NYSE: RTX). Obviously it was on the bullish list and the company’s fundamental scores are good with an EPS rating of 64 and an SMR rating of an A. 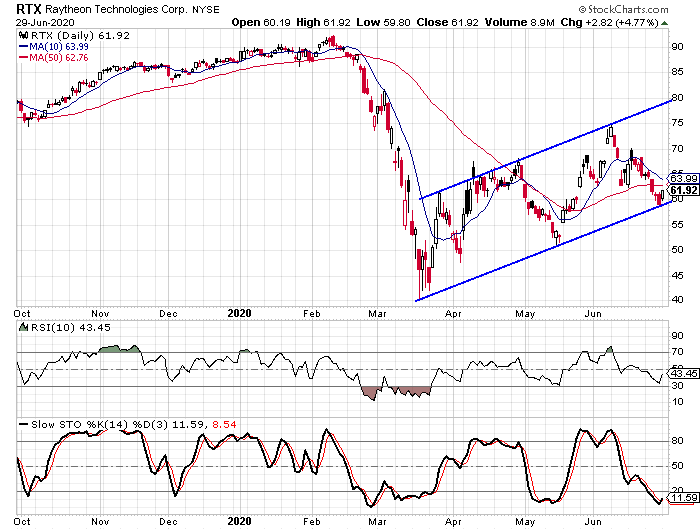 We see how a trend channel has formed off of the low in March and the stock just hit the lower rail of the channel. The stochastic indicators are in oversold territory and just made a bullish crossover. A similar pattern occurred in May and that was just before the stock rallied over 45% from May 14 through June 8.