As COVID-19 cases continued to spike in the U.S. and in specific areas, investors seemed to get spooked at the possibility of more shutdowns. Florida and Texas both took action to change or halt reopening plans as cases spiked sharply in both states. This took a toll on the market on Friday.

All 10 main sectors fell on Friday and all of them dropped over 1.0%.

The worst decline came from the communication services sector at 4.41%.

The sector was dragged down by Facebook (Nasdaq: FB) which fell 8.32%.

The financial sector was the second worst performer with a drop of 4.28%.

My scans turned in a second straight positive result, but it was by the smallest margin possible. There were 17 bullish signals and 16 bearish signals.

The barometer inched up a little more on Friday, but it remained in negative territory by a small margin. The final reading was -0.6 and that was up from -5.7 on Thursday.

Something I have noticed in recent weeks is that the technical indicators have seemed to matter more than the fundamentals and that leads to the trade idea for today. was Aecom Technology (NYSE: ACM) was on the bullish list and its fundamental ratings are mixed. The EPS rating is above average at 68, but the SMR rating is below average at an E. 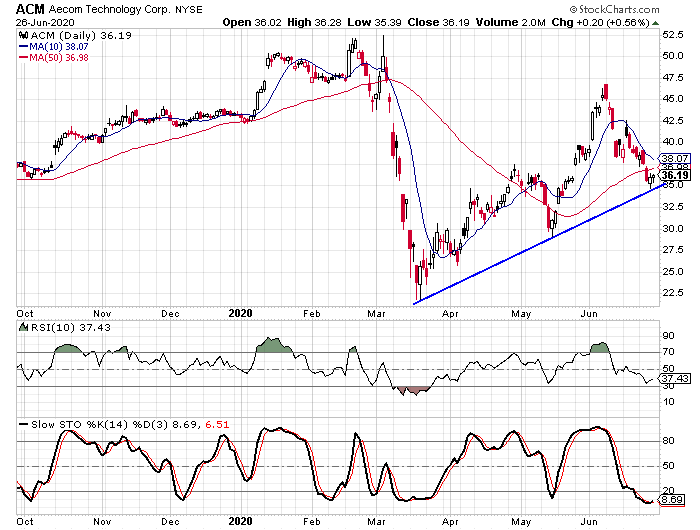 The chart impressed me as much as anything as the upward trend held up on Friday with the rest of the market getting hit. The gain on Friday was enough to cause the stochastic indicators to make a bullish crossover. I expect a similar move to what we saw off the lows in March and May.