Groupon Inc. (NASDAQ: GRPN) made a huge splash when it debuted back in November 2008. Its timing was right on the money: It was a big, new money-saving “get coupons on the Internet” idea that hit consumers just as the worst effects of the 2008 crash were beginning to set in.

The very first deal they offered was a pizza twofer at the Motel Bar, a restaurant downstairs from the Groupon offices in Chicago.

When GRPN stock went public in November 2011 at $28 a share, it was – no kidding – the biggest Internet IPO since Google.

It ended its first trading day worth a little more than $16 billion.

The stock went ballistic for a few months, up to an intraday high of around $622. The good times, as we know, didn’t really last all that long.

Last week, I was talking about shopping with my wife, and she said, “Hey, remember Groupon?”

That’s kind of the problem. And today I’m going to show you how to make some money on GRPN’s downtrend…

Groupon Had a Tough Time Fighting the Competition

Groupon couldn’t really defend its own smash hit idea; it certainly couldn’t patent it. Before long, everyone was getting in on “Internet deals,” even credit card companies like MasterCard.

With such a crowded field, the shares slid out of the headlines fast and stayed that way.

But the company is back in the news – and it’s not good news.

Groupon’s had a rough 2020 – rougher than a lot of companies have had in a rough year. In fact, during the worst of the COVID-19 crash, the stock fell below $1.

Incidentally, the NASDAQ’s rule is, if a stock trades below $1 for 30 days straight, the company gets what’s called a “deficiency notice,” which means it only has 90 days to come back up to NASDAQ standards before the delisting process starts.

Frankly, at under a buck a share, and with delisting off in the distance, a lot of veteran day traders approached Groupon like a penny stock.

Once it fell below $1, I knew it was just a matter of time before management approved a reverse stock split.

Splits are pretty straightforward. The board increases the “float,” the number of shares on the market, usually by 2:1, sometimes 5:1, and in extreme cases, 20:1.

It means that many more shares are given to shareholders. So your stock’s not worth more, but you have more of it. In the long term, a stock split can be great news for folks who just hold the stock.

Reverse splits are, well, the opposite – and they usually don’t work out for investors in the long term. The board retires so many shares that the existing shares get more valuable. The board usually only does this when the stock gets perilously low… like Groupon.

Groupon did a 20:1 reverse split, meaning for every 20 shares of Groupon owned, investors now own one.

Not many companies do reverse splits – let alone 20:1 – and actually make it. It’s the Hail Mary pass of stocks, and the odds of making it into the end zone are pretty long.

Now, the stock is worth more in dollar terms, but is it really “worth” the sticker price of more than 20 bucks a share? Personally? Nah… Not right now.

Now, I don’t know if Groupon has what it takes to turn around, or whether it’s on its last legs.

To be honest, I don’t really care. There’s a way to make money either way.

Right now, what I’m seeing is volume and volatility in GRPN shares. If you own Groupon, that might look ugly, but to a rules-based trader like me, it’s just fine.

There are big swings underway in this stock. There’s been about a 45% swing up and down, and on Monday it sank 10%. There was a 3% upswing yesterday.

Sure, you could “borrow” some GRPN shares to sell it short. You might pocket a 5% or 10% gain, but that’d be a lot of risk for some pretty limited upside potential. And remember, when you sell short, your risk is theoretically unlimited because there’s no ceiling on a stock.

I believe this company is heading lower – a bearish trend – so I like something called a bear put spread.

This move is a “spread” of two puts on one stock; you buy a long put at one strike price at the expiration date you want, and you sell a short put with a lower strike price expiring on that same date.

The cost and risk are lower than if you were to buy or borrow shares, and your reward is limited to the stock hitting the lower strike by the expiration date. That’s much more attractive.

How do we pick the price and expiration we want? I used my proprietary tools to generate a probability cone. This one is for GRPN during the month of June. 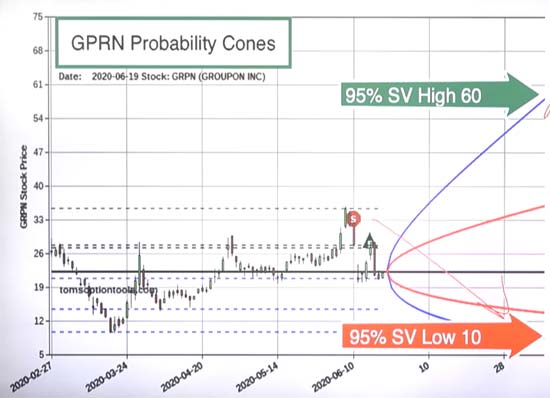 This uses statistical volatility – basically, what the stock has done in the few Junes – to narrow down a range of possible price moves for this month. We get a good idea of where the stock is likely to go and hold.

Again, you could short the stock at $20 or higher, but you risk the possibility it could shoot much higher as, historically, has happened before.

Compare that with potentially unlimited losses with short-selling, and the advantage trading offers is clear.