The stock markets have been on a tear of late despite the headwinds presented by the novel coronavirus pandemic. Until recently, the NASDAQ had been setting records for weeks. That ended when the indices fell 2% on June 24, and the so-called “fear index” VIX spiked 10%.

The media is blaming that decline on the resurgence of infections in some states. So it’s no surprise that leisure stocks fell harder than most; these stocks are seen as particularly vulnerable to viral problems. But investors ought to remember that corrections are not only necessary, but part of normal price action.

While technology stocks are rallying off of strong fundamentals, leisure stocks are still struggling just to survive. Businesses that depend on crowds for their income are at a serious disadvantage under lockdown.

Though experts are working hard to provide us with a vaccine, we’re going to be waiting months if not years for that solution.

Meanwhile companies like airlines, hotels, casinos and parks will be busy surviving rather than thriving this year. Some are in better shape than others and only require time to repair their income statements, while others’ survival still hangs in the balance. That’s why these stocks fall hard and fast on those bad days when sentiment flips negative.

Today we look at three companies from three different sectors that are crowd economies and they are:

The spike in Covid-19 infections spurred a tightening of business restrictions in some parts of the U.S. Headlines like these don’t change what has already been happening, but they do affect investor sentiment, which is a major price driver on Wall Street. 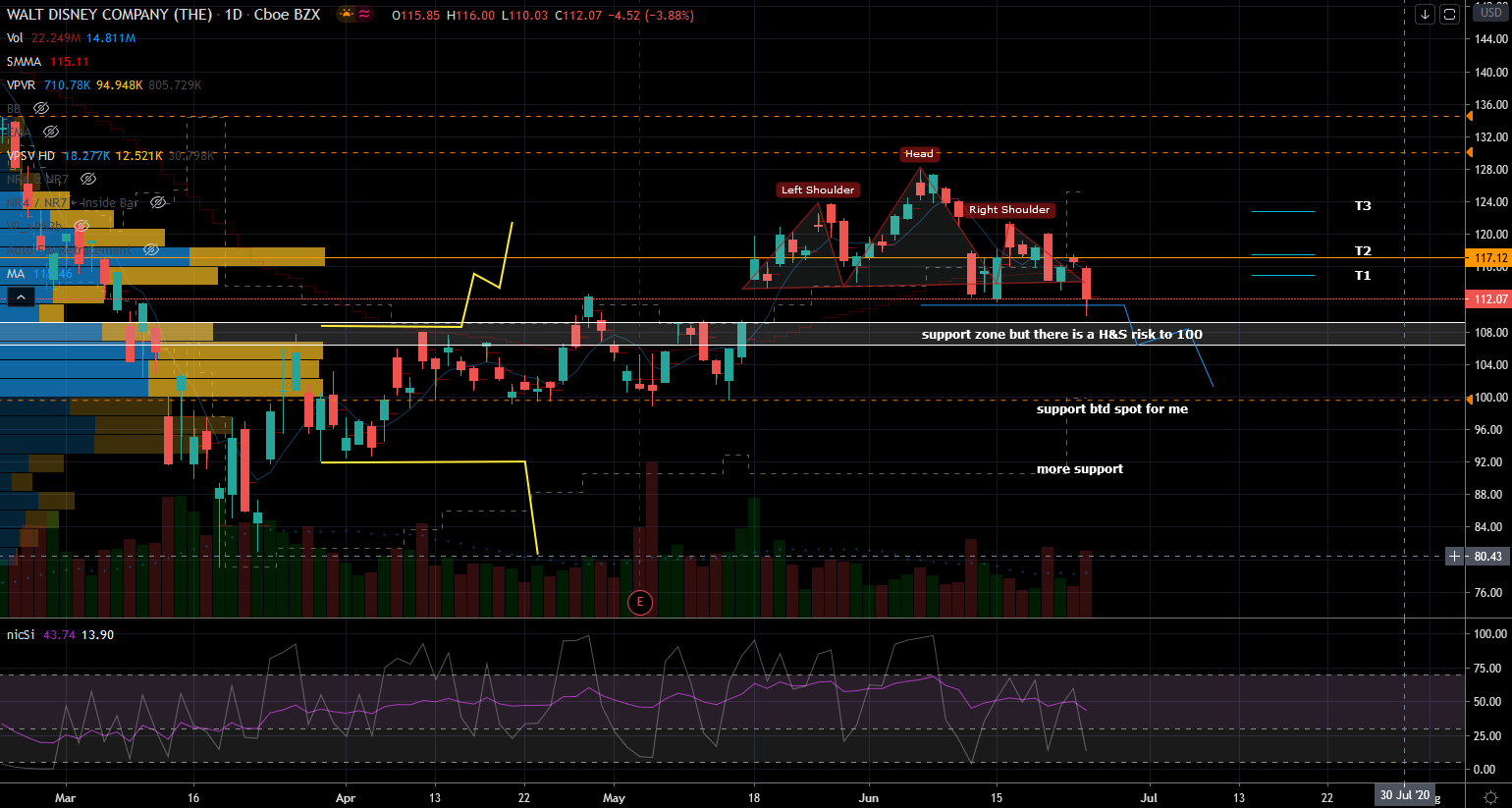 Disney is my favorite pick today because it is a known quantity and a global powerhouse. There isn’t a soul on the planet who isn’t familiar with its assets.

Disney movies always sell out, and prior to the quarantine, their theme parks were always overbooked. Recently though, those same parks have been out of commission and theaters have been closed.

Luckily for DIS stockholders, last year management launched a spectacularly successful streaming platform, Disney +. That service quickly amassed 50 million users in a much quicker ramp up than sector leader Netflix (NASDAQ:NFLX). This opens opportunities for Disney to help offset theme park closures. I’m sure if they had to, they could release movies through streaming under a pay-per-view model.

Fundamentally, the company is healthy but we can’t really judge its real value right now because we don’t know what the new normal is going to look like. Still, I am very confident that they will navigate this crisis, as they have navigated others for almost a hundred years.

When a company is this strong it only makes sense to buy its shares on the dips. The Covid-19 correction was the fastest and one of the largest on record so it’s sensible to initiate or add to long positions in Disney stock.

This [week], DIS stock is under pressure after yet another delay in reopening California parks. However, there is support below, so even if current levels aren’t the actual bottom, that bottom will be close enough for buying to make sense for anyone with a time frame longer than a few weeks.

Those looking to trade options can even make it easier by selling puts and leaving 20% buffer from current prices. 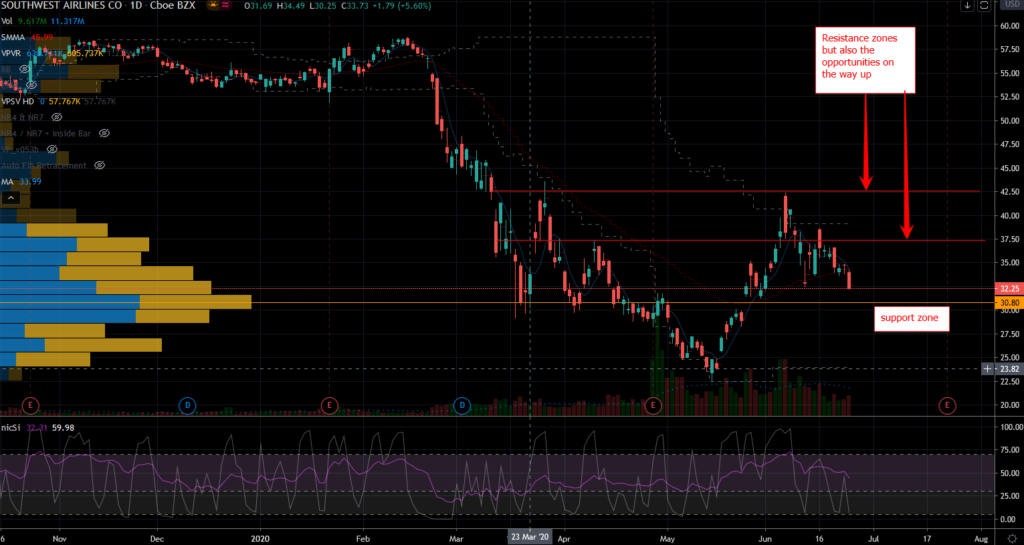 Airlines are poster children for the current crisis due to their huge overhead costs and near-zero sales during lockdowns. And while things are improving, they aren’t recovering nearly fast enough.

Air traffic reports have improved tremendously but are still down almost 80% year-over-year, according to TSA screening records. Recovery from the bottom has been surprising at times, in part due to a sharp spike of June 4 headlines that airlines were adding flights in June and in July. LUV stock had already been acting better than most of its competitors so the subsequent rally was a continuation of the stock trend, not just the sector-wide blip.

The overall airline move failed because it was overblown. A lot of those gains have since been given back, opening the door for buying-the-dip instead of chasing the headlines. The survival of these airlines is no guarantee; they bleed hundreds of billions a day just to service their overheads. They need top line relief and fast.

Airlines are scrambling to raise cash by any mean necessary. They are getting creative by borrowing, issuing stock, using government aid and even leveraging miles programs.

LUV stock trades better than the rest because it’s always been the no-frills airline, so it never had much fat to trim. They established their system from the get-go to run lean, giving them a distinct advantage in the leanest times ever. Southwest Air Lines would be my favorite of the bunch to catch as a falling knife.

Another indirect source of bullishness may come when Boeing (NYSE:BA) receives clearance to fly its 737 Max again. Southwest’s fleet is nothing but 737 planes, though most of them aren’t Max models. But just the impression of the freedom of the Boeing 737 should incite buyers into Southwest more so than the rest of the airlines.

In this case it makes sense to buy shares over time starting now. Even better, those who know options can sell puts to own shares lower. I bet they will have better news to report on the next round of earnings. Long term, LUV stock will perform in line with wider markets. 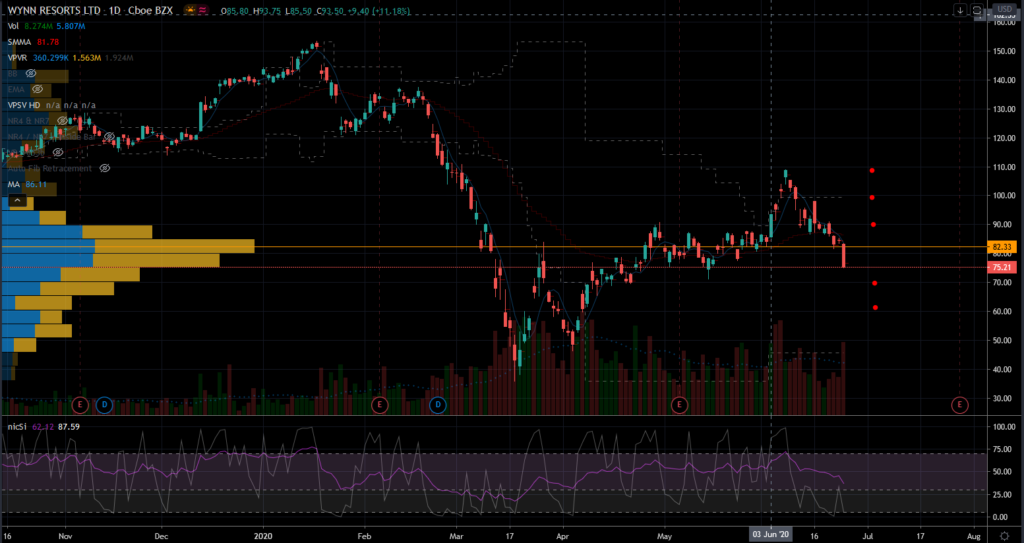 Hotels have it easier than the airlines, though not by much. They too are severely hampered by coronavirus shutdowns. The reopening process has begun but it will be slow and labored. Some states are trying to rush things along, but we’ve already seen setbacks this week.

Hotels can tolerate empty rooms with less damage than airlines can fly with empty seats. They don’t sell out all their rooms year-round, as most have busy-seasons and off-seasons, meaning the damage is time specific.

On average, hotels book an occupancy rate just above half so they have always operated without needing full booking. Most tend to spike and over-sell during special stints. The virus risk is spread across time therefore easier to manage. Their recovery should be surprisingly good in the next few months.

Wynn Resorts has a history of winning on Wall Street, but this is a relatively brand new management team that has yet to face such challenges. The assumption is that they are up to the task and the stock will go back to its winning ways. There are levels to watch from a technical perspective.

As it falls into $67 per share, WYNN stock will find support. The bulls are still in charge because the trend of higher-lows remains intact off the Covid-19 bottom. This is a stock to own long term, though this correction is so far like none before it.

We’ve never had the modern world shelter in place at the same time and for this long. The recovery is coming, though it may take a little longer than anticipated. But eventually Southwest Airlines will fly us, Wynn will host us and Disney will entertain us once again. There are resistance lines to break, but these are opportunities on the rebound.