Stocks opened with little change on Thursday and then the four main indices all dipped in to the red in the first few hours of trading. Texas announced that it was halting re-opening plans as virus cases continued to climb and that seemed to shake investor confidence. Stocks eventually turned things around near lunch time and all four indices rallied in the afternoon.

Nine of the 10 main sectors moved higher on Thursday with the utilities sector being the lone one to finish with a loss of 1.22%.

The financial sector gained 2.65% as regulators eased Volcker rule requirements, but the 2020 stress test results were set to be released after the close.

The Fed was releasing the aggregate results and asked banks not to release individual results until at least next Monday.

My scans turned in a positive result on Thursday and that’s the first time in seven trading sessions that they have done that. There were 43 bullish signals and 23 bearish signals.

The barometer rose, but remained in negative territory. The final reading for Thursday was -5.7, up from -24.5 on Wednesday.

One thing that really stood out about the scans last night was the quality of the stocks on the bullish list. There were only a few stocks with below average marks in either the EPS rating or SMR categories. One stock that stood out to me was AerCap Holdings (NYSE: AER). The company scores a 91 on the EPS rating scale and a B on the SMR grading system. 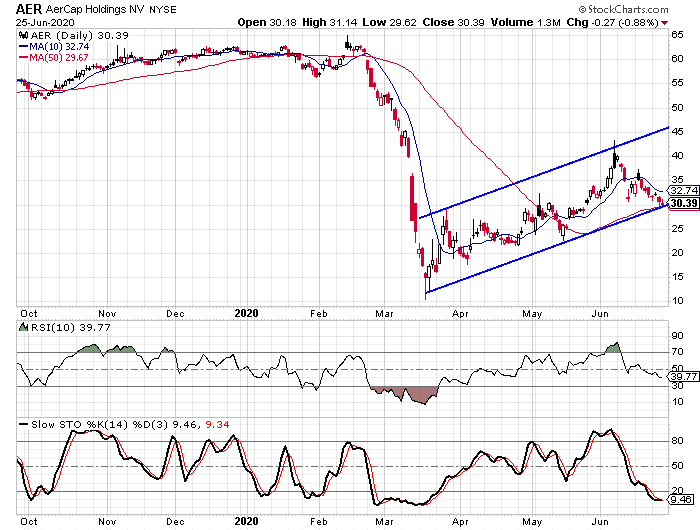 The chart shows how the stock has been trending higher with a trend channel defining the cycles within the overall trend. The stock just hit the lower rail and there is dual support in that area thanks to the 50-day moving average. The stock is oversold based on the stochastic indicators, but they did make a bullish crossover last night.