Often the best opportunities present themselves during the toughest of times. The quarantine correction, which had most stocks staring hard into the abyss, was a perfect time to shop for quality stocks to buy at bargain price. The energy sector was hit especially hard, as it was already on the ropes even before the lock down.

As a result, oil prices fell below zero on a technicality, so needless to say that there was carnage in the sector. Energy stocks suffered and the fear was that many companies there would go to zero.

The market has stabilized since then and oil prices have recovered well. But they are still depressed, considering that just a few years ago prices were above $100 per barrel and the experts were calling for shares to rise even higher.

We’re in a new world, and the fundamentals for oil continue to deteriorate.

We still need fossil fuel in the short-term but the push is still towards reducing their consumption.

The bottom line is that the major oil companies will remain very healthy for decades because the shift will be slow as molasses.

From a trading perspective the easy profits are done from the bounce off the Covid-19 extreme bottom. I wrote about that back in mid-March, and even though I didn’t nail the absolute bottom, I won’t complain about a 35% run. Holding out for the perfect entry point is a futile effort in the long run, and misses the point.

But for those who missed out then, there are still opportunities now. The range has stabilized and we can now see some support levels that investors can use to trade.

The oil companies we discuss today are the only ones I would bother to trade. Presently, every major dip in their stocks is a buying opportunity. Here are 3 energy stocks to buy:

The risk during the crash was concentrated in the smaller debt-heavy companies that will not survive under the new normal. It’s only a matter of time before most of them disappear. Consequently, trading oil stocks only makes sense with our picks today.

Energy Stocks to Buy into Next Year: Chevron (CVX) 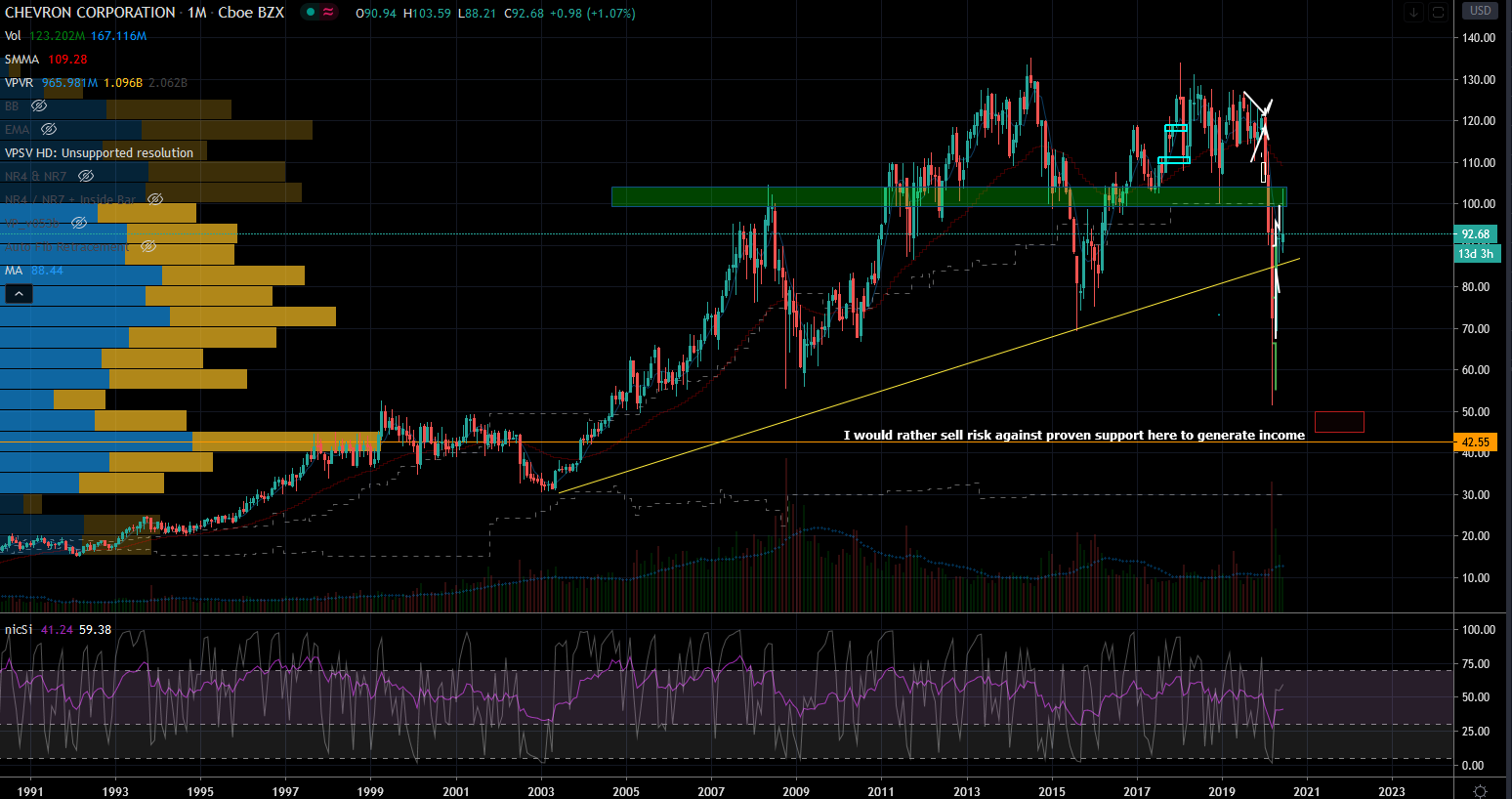 The main concern for many companies has been survival, but that wasn’t the case for Chevron. CVX still boasts a solid balance sheet, and the company has tightened up the purse strings to make sure they maintain it.

In fact, management has also reassured investors about their commitment to protecting the dividend at all costs. They aggressively cut spending to do so, and further confirmed they had more room to cut in case the malaise persisted. Survival wasn’t an issue here, so the stock was a buy off the bottom.

It is not too late to get bullish on Chevron stock. Over the long haul, it should recover alongside the rest of the market. But there are better ways to trade CVX via the options market and realize gains even if nothing happens this year.

One thing that the big drop did is establish a support zone that survived the toughest test on record. The world literally stopped and that was the extent of the stock damage, so you can count on chevron to survive the smaller aftershocks that could follow this year.

Traditional investors buy the shares and hope for rallies. Meanwhile, they can collect dividends if the rally stalls. I prefer to generate income without any hopes or fears at all.

The trade is to sell the December $65 put on CVX and collect $3 per contract. If the price falls below $65 this year, they commit to buying the shares at that price. This means that the investor would have been paid to buy CVX at a 30% discount, and the break even point is at $62.

Those who don’t want to own the shares can sell a put spread instead to limit the risk. These trades do not need a rally to win; in fact, the stock can fall to a 14-year low and still win. This is basically going long a stock and leaving a giant buffer from current price. 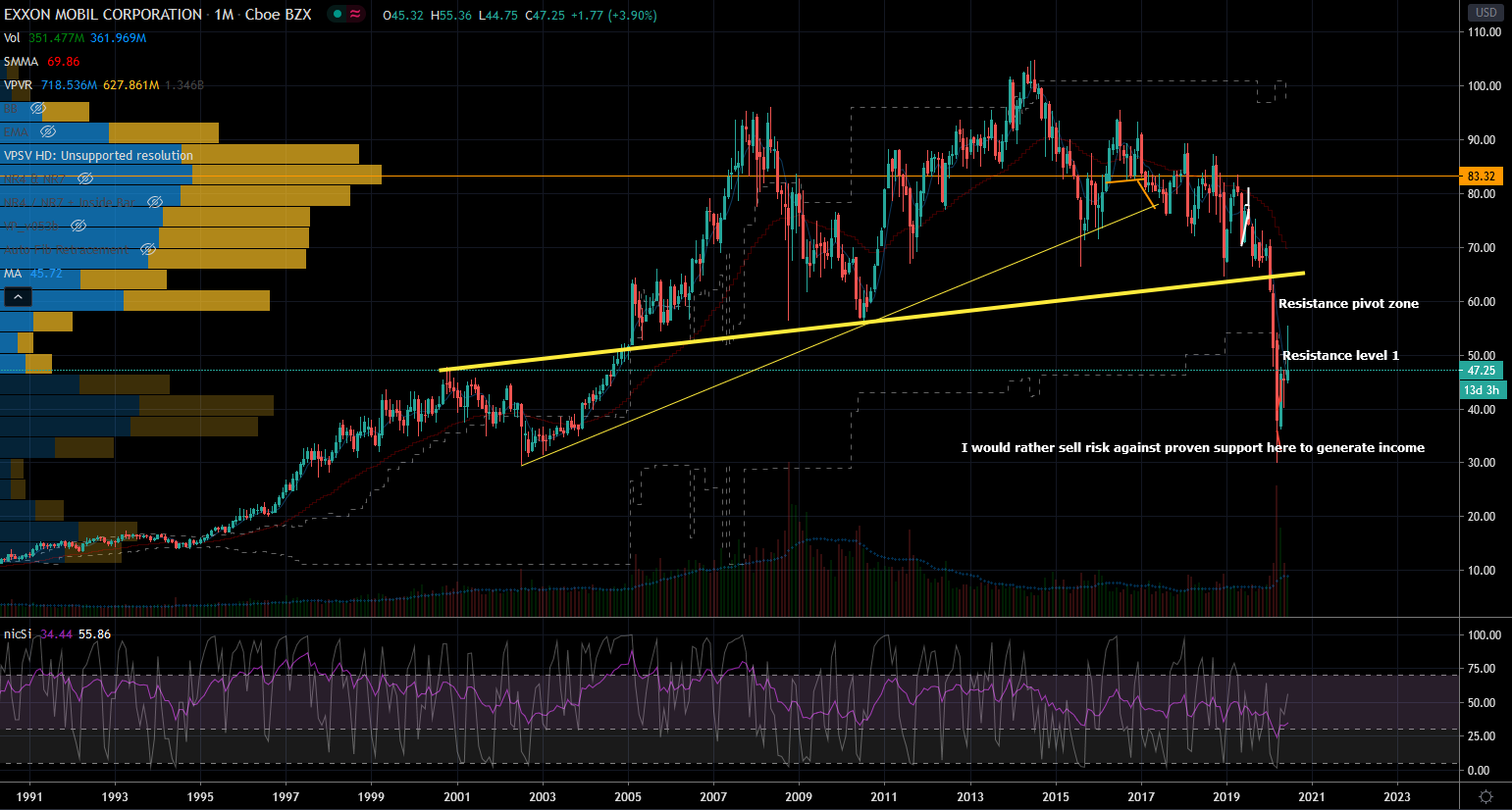 The argument for today’s trade setup works almost exactly the same for Exxon as for Chevron. For some reason, CVX has been behaving better than XOM stock on the charts, so I prefer that company, but XOM is also a solid play here.

The fundamentals are almost identical, and XOM also vigorously defended their dividend. The long-term thesis of this company remains unchanged. But the price of their core commodity has changed dramatically, perhaps forever. Expecting tremendous upside is therefore too optimistic without a drastic change in the fundamentals of oil prices next year.

I don’t see demand for fossil fuels exploding and I don’t see supply getting crimped. Besides, if energy prices rise then the supply will also increase because the western producers will come back online to pump, even at a loss, in order to service their debt obligations.

That means there will always be downside pressure on oil prices, so don’t expect explosive stock prices for the energy sector either. There is also the Tesla (NASDAQ:TSLA) effect to contend with, as that company spearheaded a wave of electric vehicles manufacturers which serve as another source of pressure on oil.

Here too, I prefer selling risk against proven support than buying into hopes of further upside in XOM stock. Investors can sell the January $32.50 put and collect almost $2 to open the trade. This means that in order to lose money, XOM would need to fall more than 40% from current levels, as the break even point is $30.50.

And if prices stay above the put sold then the investors would retain the maximum gains. Here too, traders can sell the credit put spread instead of a naked put to limit their risk.

Exxon fell below $30 during the March crash, but I don’t believe it will repeat that performance. That decline was an overshoot under extremely harsh and unique conditions. 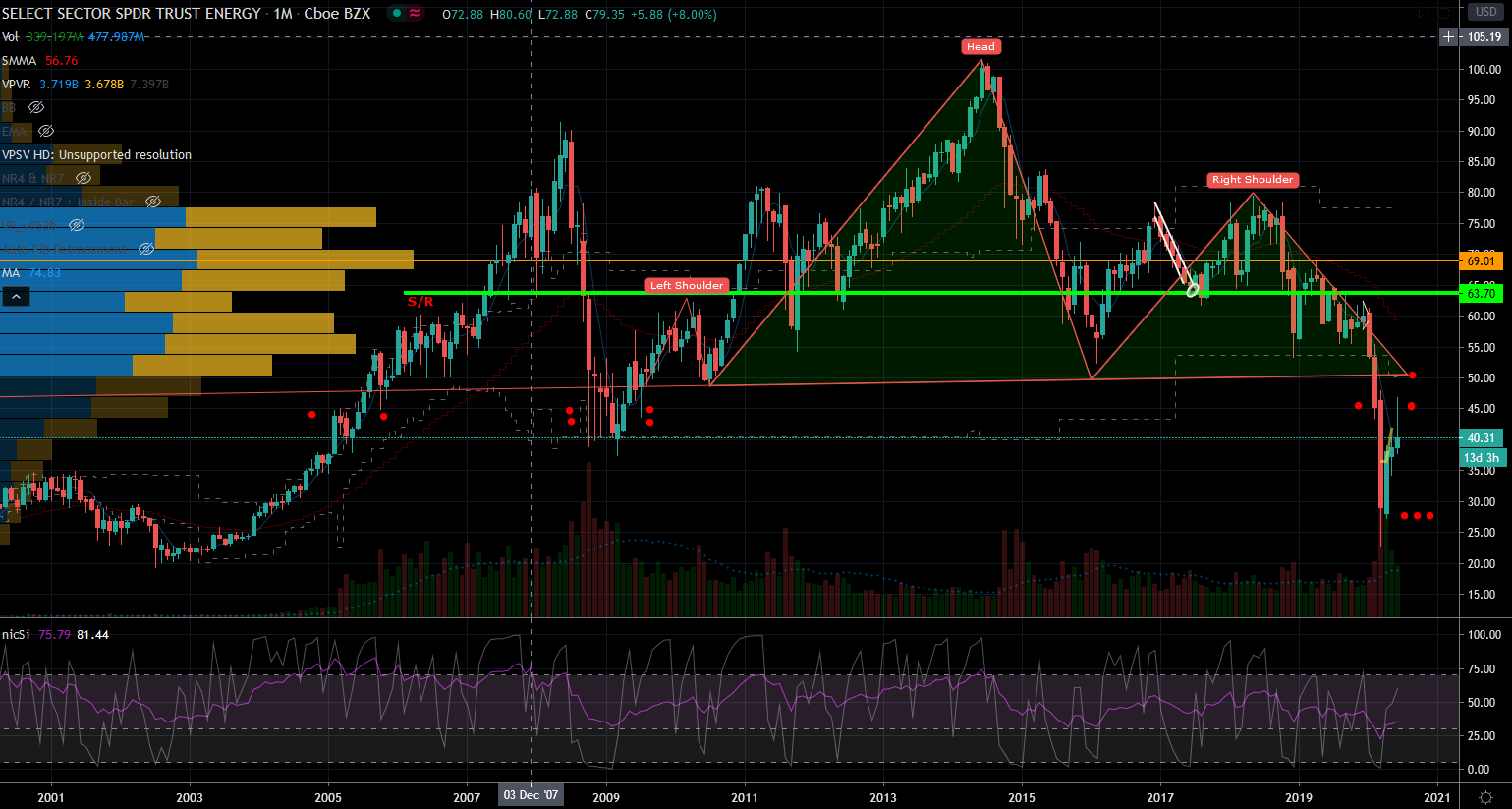 Some investors like to spread the risk away from individual companies through ETFs. In this case that could work against them, given that the risk in oil is sector-wide, and large companies like CVX and XOM are better positioned.

Using an ETF to play the sector opens up a potential Pandora’s box of exposure to less reliable equities. But I don’t mind it too much since 44% of XLE is made up of these two giants.

The important technical level for the XLE stock pattern is at $50 per share. Once it lost that support, the target became $20 on a bearish pattern. In fact the damage should have been bigger, but buyers stepped in to stop the debacle.

Like our other two stocks today, the drop gives investors visible support zones. But this also means that there is also a resistance line above. Prior support around $50 will now remain forward resistance until the bulls can muster up enough power to rise above.

Moreover, there were two heavy XLE stock battles around $45, one in 2019 and the other back in 2005. The bulls won those two fights, but are now at a disadvantage as they approach the price level from below.

This is all to say that here too, I wouldn’t bank on further upside because it won’t be easy. Prices have to fight the long-term clean energy trend, a big drop in demand and the energy price wars between OPEC, Russia and the United States. This is too strong a current for energy stocks to swim against, so it makes more sense to sell against proven support instead of buying shares.

Of the three stocks discussed today, this would be my least favorite because it carries risk from other smaller companies that are not on solid footing. But for investors hesitant to bet on a specific name, XLE provides an opportunity to play the sector more broadly.