Monday saw stocks open mixed, but they rallied early and held on to the gains through the afternoon. Two of the four indices opened lower but by the end of the day all four were solidly in the black.

Eight of the 10 sectors moved higher on the day while two dropped.

The healthcare sector fell 0.99% as the worst performer and the tech sector lost 0.03% as the other sector in the red.

The energy sector was the top performer with a gain of 1.75% and the utilities sector jumped 1.19% as the second biggest gain.

My scans remained bearish with 77 bearish signals and only three bullish signals.

This is the ninth straight day with a negative outcome.

The barometer didn’t change much even with the big negative reading. The final reading for Monday was -84 after a reading of -84.5 on Friday.

All three of the stocks on the bullish list were from the healthcare sector and none of the trade setups looked all that great to me. This led me to a third straight bearish trade idea and today the subject stock Berkshire Hathaway B-Class (NYSE: BRK/B). The company’s fundamental ratings aren’t terrible with an EPS rating of 63 and an SMR rating of a C. But the chart was the main reason for the bearish stance. 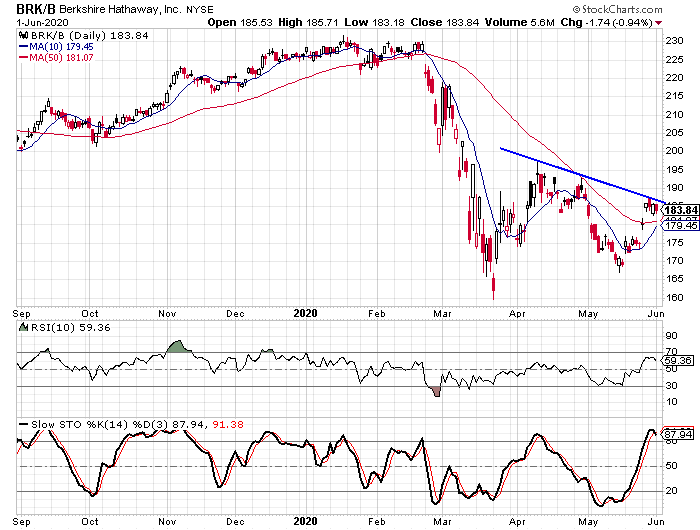 The first thing that I noticed was the trend line connecting the highs from the last two months. I saw it before I even drew it. The second thing that stood out was the pattern in the stochastic indicators. The indicators are in overbought territory and made a bearish crossover last night. The last two times they have been in this position the stock fell in the ensuing month.