Stocks opened modestly higher on Wednesday, but fell in mid-morning. They turn things around before noon and would rally sharply for the rest of the day. Three of the four indices were in negative territory at some point in the morning, but all four would end up with gains and two moved sharply higher.

The Russell jumped 3.11% by the end of the day and the Dow gained 2.21%. The Dow was the only index that didn’t dip into the red in the morning.

The S&P tacked on 1.48% while the Nasdaq lagged the others and was down the most in the morning.

All 10 sectors moved higher on the day, but once again there were two that really stood out.

The financial sector jumped 4.34% and the industrial sector gained 3.34%.

There were only two sectors that didn’t gain 1.0% and those two sectors are what kept the Nasdaq from matching the gains from the other indices.

The tech sector only gained 0.57% and the communication services sector tacked on 0.71%.

My scans remained negative on Wednesday, but they weren’t as bearishly skewed as they were on Tuesday. There were 38 bearish signals and 11 bullish signals produced from the scans.

Despite the big difference between lists, there were a number of companies on the bullish list with strong fundamental ratings. One of those companies was General Mills (NYSE: GIS). The company didn’t have the highest fundamental ratings, but they were strong enough. The EPS rating is a 67 and the SMR grade is a B. 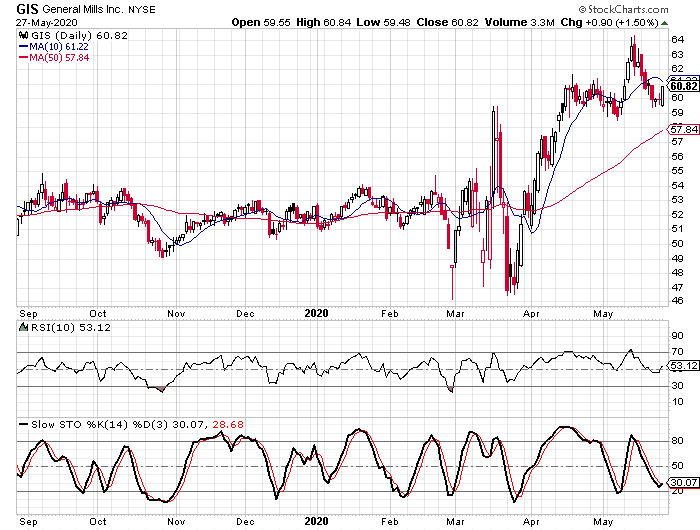 While the fundamental ratings weren’t the highest, it was a combination of the solid fundamentals and the chart that led me to recommend General Mills. We see that the formation on the chart for Wednesday was a bullish engulfing pattern and it created a bullish crossover in the daily stochastic indicators. I look for the stock rally over the next month.