Stocks rallied on Friday ahead of the Memorial Day holiday. Three of the four indices opened lower, but all four rallied throughout the day and three of the four ended up gaining ground.

The Russell was the lone index to start the day in the black and it would end leading the way with a gain of 0.59%. The Nasdaq tacked on 0.43% for the second best performance and the S&P gained 0.24% on the day.

The Dow rallied off of its lows and closed at its highest point of the day, but it still fell 0.04% on the day.

Utilities led the way with a gain of 1.11% and communication services stocks were second best with a move of 0.60%.

The energy sector was the worst performer on the day with a drop of 0.62% and the financial sector fell 0.36% for the second worst loss.

My scans remained solidly skewed to the bearish side with 69 bearish signals and only four bullish signals.

The barometer dropped from -15.8 to -42.1 once these results were added to the calculation.

After three straight bearish trade ideas, I have a bullish one for you today. Citrix Systems (Nasdaq: CTXS) appeared on the bullish scan and the fundamental ratings and the chart got my attention. The company scores an 85 on the EPS rating system and it gets an A in the SMR grading system. 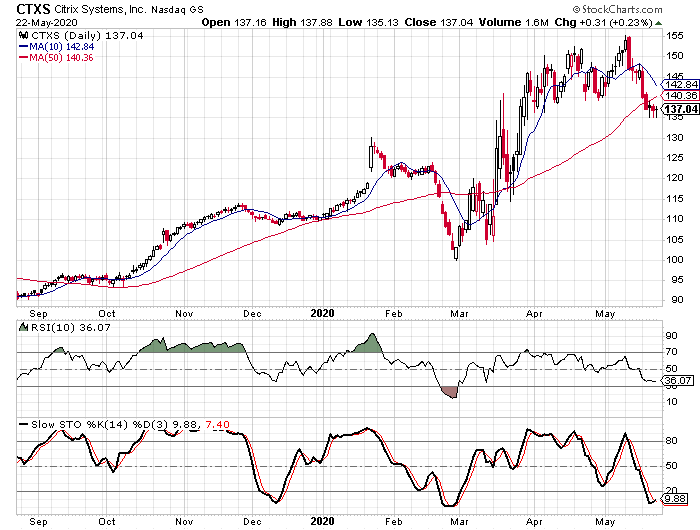 The first thing that jumped out at me on the chart was how the stock has found support at the $135 level. Each of the last three days the stock has dropped down and traded just above that mark, but the price has held. I also took note of the stochastic indicators being in oversold territory and making a bullish crossover on Friday. The stock rallied nicely in both December and in March after the indicators reached oversold territory and then turned upward.